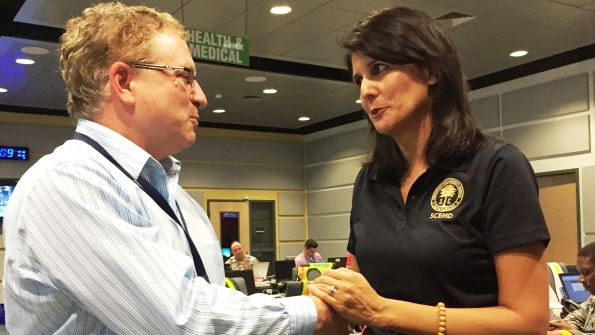 From the time the county had its first signs of rainfall on Friday, Oct. 2, until Tuesday, Oct. 6, Charleston County’s ASTRO 25 radio network from Motorola Solutions received 275,000 first-responders calls, and only nine calls received a busy signal, Bill Tunick, director of radio and telecom for the county, said during an interview with IWCE’s Urgent Communications.

“We neared 100% call success rate,” Tunick said. “We had tons of water rescues, both in the flash-flood event, when the rain was coming down, and post-rain.  We had some severe river flooding, because some of our rivers are in really rural areas of Charleston County.

“In these very rural areas at the border, where you wouldn’t really expect to have good radio or cellular coverage, this is where the rescues were taking place. The ability to use your radio reliably in those instances—it saved lives. There’s no question about it.”

Charleston County was one of the early adopters of interoperable communications systems after the county experienced the vulnerabilities of its analog system when Hurricane Hugo in 1989, Tunick said. The system was updated in 1991, and the P25 system was implemented in 2006. The radio network was key, but the county also had to erect hurricane and flood-ready infrastructure, including 16 towers across the county.

“We’ve been planning for this type of event, since I got here,” said Martin, who joined the county in 2006. “We put together a system that could not only survive, but excel under those conditions. Any of the sites within two miles of the coast subject to storm surge are on stilts. We don’t have any towers in flood zones. The foresight was there to have these placed above water.”

Planning also contributed to the successful rescue efforts and seamless communications with neighboring jurisdictions, including the state and national Coast Guard, as well as the statewide Palmetto 800 MHz radio and data system—most of which do not use P25 technology, said Robert Marshall, territory vice president of sales for Motorola Solutions.

A day before the storm began, Motorola’s engineering and sales team conferenced with state and Charleston County officials to ensure that all were prepared for the onslaught of calls and rescues that would ensue. During that process, Motorola discovered that the state’s public-safety communications’ team had depleted its cache of radios, so 100 APX Series P25 two-way radios were ordered and delivered within 24 hours.

“When storms like this develop, we continually monitor them closely,” Marshall said. “A conference bridge is manned 24-7 by our engineers, PMs, management and sales. If a customer request comes in for anything…we make sure we’re ready to respond with resources.”