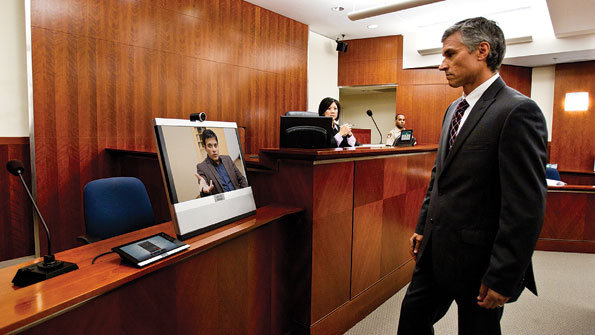 Of course, to make such use cases a reality, participating entities need a certain level of connectivity, Schwarz said. Those with aging communications infrastructure likely will need to upgrade their systems before considering connected-justice solutions. However, entities that recently upgraded could see tangible benefits quickly, he said.

"For entities that have a relatively modern infrastructure — installed in the last three years — the cost can likely be zero," Schwarz said. "We are doing a pilot project for our visitation solution where they literally do not need to buy anything. We just need to configure what they have, and they need to begin their business-process change, which will take raw expense out of their system."

But changing legal processes that have been in place for decades — if not centuries — can be an issue, particularly if key players have had a poor experience with older video-conferencing solutions, which often included audio latency, Schwarz said.

"What we find is that, if you start with a few important cases and earn credibility and fan out from there, it's typically the most effective scenario. … Asking someone to do a wholesale change [won't be considered] unless the use case is proven in their back yard," he said.

Theoretically, almost all aspects of the criminal-justice system that typically involve face-to-face interaction could be conducted via video conferencing, Schwarz said. However, it's doubtful that will ever happen, he said.

"There are likely parts of it — for instance, critical testimony — that will be a long ways from going virtual," Schwarz said. "And it's more because of the way that court proceedings work.

"If you have a long, drawn-out case, the judge and the attorneys may want to look the individuals in the eye as they're going through that process."

Meanwhile, once appropriate connectivity is established in courthouses and correctional facilities, other non-judicial video opportunities may present themselves, Kennamer said. For example, Los Angeles County already has developed a telemedicine program to address inmates' healthcare needs, and strategies such as video education and visitation on a regular basis could help inmates from becoming repeat offenders.

Looking at the potential impact of video conferencing holistically on the justice system is certainly possible, if key decision-makers approach the subject with an open mind, Kennamer said.