VIEVU announces a major upgrade to its VERIPATROL software system that enables video evidence to be securely stored, retrieved and managed within a variety of file-storage platforms, according to the company. 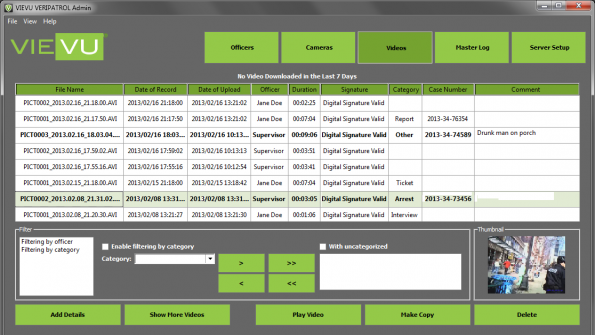 Body-worn video (BWV) system provider VIEVU recently announced a major upgrade to its VERIPATROL software system that enables video evidence to be securely stored, retrieved and managed within a variety of file-storage platforms, according to the company.

Offering flexible access to video evidence is a key component to VERIPATROL, according to VIEVU President Steve Lovell.

“We have a standalone environment that can operate on just one computer for a very small deployment, and we have a lot of those,” Lovell said during an interview with IWCE’s Urgent Communications. “We have a network environment that can point back from client stations to a main central server—kind of a hub-and-spoke [approach], if you will—and then we can push data from multiple precincts to one location. Now, we’ve extended to a ring of storage, so we can actually push the files from the clients from the main server to a third-party hosting service.

“But the fourth ring that we’ve come out with is the mobile platform. The mobile makes the camera in the field readable to the officers, but it’s also a full working client, so the officers can upload, transfer, share and add comments and case notes. They have a lot of flexibility in the car, in terms of what they can do.”

An optional add-on, VERIPATROL Mobile+ lets officers download video from the field, as well as add classifications and notes to the media before transferring or sharing it via broadband wireless networks, according to VIEVU CEO and founder Steve Ward.

“VIEVU has made it incredibly efficient, cost-effective and seamless for law-enforcement agencies to use BWV technology,” Ward said in a prepared statement. “It is flexible and scalable, allowing access from the local networks or the cloud for officers to view from a precinct or the laptop in their patrol car. Other vendors charge thousands of dollars per month for access and storage fees, [but] VIEVU has never charged our customers for the use of VERIPATROL.”

VERIPATROL uses a FIPS 140-2-compliant digital signature process to ensure file authenticity in a manner that exceeds evidence standards and prevents officers from tampering, editing or deleting video, according to the company.

New features in VERIPATROL 3.0 include an enhanced user interface for mobile viewing, a “lockdown” capability that can be used to prevent case-sensitive video evidence from being viewed by anyone not associated with the case, as well as the ability to generate courtroom-ready audio transcripts from the video.