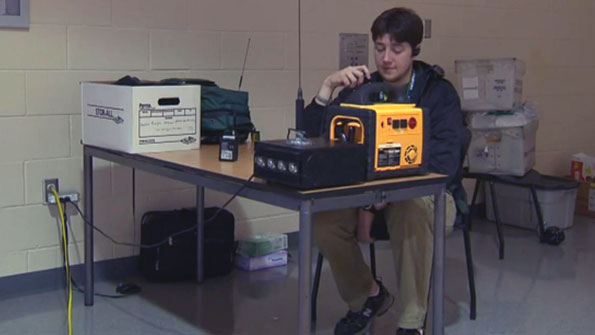 A version of this article appeared in the March 2013 print issue with the headline: Ready and willing.

That's some of what you'll find in a "go-bag." And if you're one of the many amateur-radio operators who volunteer during local emergencies, you always keep a go-bag packed. When disaster strikes, you grab it and rush to a Red Cross shelter, an emergency operations center (EOC) or some other activity hub to do what you do best — get messages through, despite all sorts of obstacles.

They don't often get a lot of publicity, but amateur-radio operators — or "hams" — play an important role in emergency response.

"They're a prime example of a grassroots effort," said Keith Robertory, manager of disaster response emergency communications at the American Red Cross in Washington, D.C. "They live where the disaster occurs, and they already have the equipment, the knowledge of the location and knowledge of how the disaster would impact that location. So they're immediately there and can start doing work."

Hams often swing into action well before a storm or other event causes havoc on the ground. During hurricane season in the Caribbean, for instance, hams in that region keep their eyes on the weather out their windows, said David Sumner, chief executive officer (CEO) of the American Radio Relay League (ARRL) in Newington, Conn. They use their radios to call in observations to the National Hurricane Center in Miami.

As the storm passes, it might knock out power and damage antennas, "so they rig another antenna, start up the generator, and they're back in business," Sumner said

When hurricanes, blizzards, ice storms, earthquakes, tornadoes or other forces of nature cause widespread damage, hams get to work wherever they're needed. In some cases, they transmit messages to take the place of two-way radio or phone systems that have been rendered inoperable in the aftermath of a disaster.

For instance, as Superstorm Sandy overwhelmed parts of the northeastern U.S. last October, some hams assisted regional hospital systems that had lost the ability to communicate among their buildings, Robertory said.

"Somebody would go to them and say, 'We need this message passed to this building,'" he said. "They would get on the radio, call the amateur-radio operator in that other building, and give them the message." The second operator then carried the message to the recipient.

Amateur-radio operators also help individuals contact family members, help the Red Cross conduct damage assessments and help get shelters established, Robertory said. For instance, people in a shelter might want to register on the Red Cross's "Safe and Well" system to let family and friends know that they're okay, but the shelter might not have power or Internet access at the time.

Even when other networks are operating, ham operators take some of the load off those communications systems when traffic gets heavy.