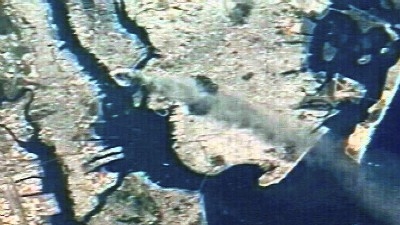 Tuesday, Sept. 11, 2001. It was Primary Day, and I was going to my union office to help our chosen candidate. Around 0840, I’m making my way down 7th Avenue when I hear a jet plane overhead—not a common occurrence in Manhattan, but not outside the realm of possibility. I thought to myself that it sounded a little low. (Little did I know, I was correct.) Minutes later, I started hearing sirens. Coming from all directions, they appeared to be heading south and west. Police cars, unmarked cars and ambulances started forming convoys down 7th Avenue. With nary a clue as to what had occurred, I made my way to the union office.

In the lobby, the doorman had a television on. On the screen was what looked like a scene from the movie The Towering Inferno. Fire and smoke were billowing from the upper floors of Tower 1. My immediate reaction is unprintable. My second thought was that I had to get to the Manhattan CO as they must have been going through hell. I wandered out into the street to find a cab, my head in a daze, knowing full well what to expect when I got to the office.

While cruising uptown in what must have been the slowest cab ride ever recorded, I gathered my thoughts, tried to control the adrenaline that was rushing into my system and thought about that other fateful day in 1993. The cab driver was listening to a local all-news station. Then I heard about the second plane. The situation must have been pure bedlam in the office.

I arrived at the Manhattan CO around 0940. A dispatcher was standing outside in tears. She had taken some calls from people above the fire floor. They begged, pleaded and cried for help, but all exits were blocked by fire. On the news, they showed pictures of people jumping to their deaths rather than being burned alive. It was overwhelming her.

Inside, the situation was serious but not totally chaotic. They had just transmitted a second alarm over and above the two fifth alarms already out. We had to pull units from Queens and Brooklyn just to make the required eight engines and five trucks. Then the unthinkable happened. A voice on the radio screamed that 2 World Trade Center was collapsing. (The television was turned off prior to this.) Not being able to see what was happening, I thought to myself that it must have been the top part of the building cut off by the plane that had fallen down. The radio went eerily silent. “Manhattan calling Field Comm. Manhattan to any chief at the WTC.” 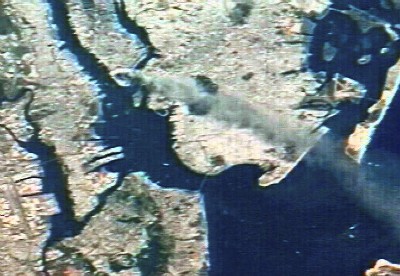 It wasn’t just the top of the building. It was the entire 110-story building falling into a classic pancake collapse. People down below had just barely enough time to start running when the building started collapsing. The force of the debris hitting the ground was tremendous. People thrown about like rag dolls. Windows were blown out everywhere. A dust cloud rose high enough to be seen by the International Space Station.

In Brooklyn, units were assembling at the entrance to the Battery Tunnel in preparation for coming to Manhattan. Engine 228 was already on the Manhattan side when the tower fell. The dust cloud overtook them, and they made an urgent transmission to Brooklyn saying that no one should enter the tunnel at this time—visibility was zero. Another radio transmission to Brooklyn reported a collapse in the tunnel. Fortunately this report was erroneous. About 30 minutes later, Tower 1 fell.

The next few hours were a blur to me. I was one of 24 people in the office: 12 dispatchers, eight supervisors, a borough supervisor, both deputy directors and the director of dispatch operations. There was too much going on to focus on the big picture, so I zoned in on the tasks I was given by the deputy directors who tried their best to orchestrate the entire incident.

To break the tension, we rotated positions a lot. Many dispatchers took turns at the radio and the telephones. We went outside to get some air quite a bit, too. The streets surrounding all of the central offices were barricaded, and police were stationed outside. It seemed so surreal. The mighty towers had been reduced to a pile of rubble, the streets of Manhattan were deserted, F-16s were flying overhead, and the possibility loomed that we had lost at least 10 alarms worth of firefighters and apparatus (40 engines, 16 ladders and 10 battalions). With a massive search and recovery mission ahead of them, the department instituted off-duty recall, and firefighters went to a 24-on, 24-off schedule. All surplus members from every house either staffed a spare apparatus or were transported to Ground Zero.

I was scheduled for a day tour the next day in Brooklyn, so I went off duty at 2200 hours. The ride to the Times Square subway station was spooky. There were very few cars on the road, and pedestrians were conspicuous by their absence. The normally crowded Times Square had more police than tourists. On the subway platform, only the occasional passing of a train pierced the silence. No one was talking very much. There was a certain amount of paranoia in the air. I must have recalled every subway disaster I’d ever seen in a movie during the ride—The Taking of Pelham 123, for example.

In Brooklyn on Wednesday, the situation was pretty bad. About half of our resources were in Manhattan; most wouldn’t be coming back for a while. Luckily, someone had arranged for mutual aid from New Jersey. We had dozens of rigs from all over the state. Some came from paid departments, some volunteer. We had apparatus from Elizabeth, Summit, Cedar Grove, Bloomfield, Montclair, Piscataway, Edison Township, Belleville, Newark, Manalapan and many others whose names I can’t recall. They couldn’t hook up to our hydrants, nor could they operate on our radio frequency. But they had booster tanks, water cans, tools and portable ladders that were better than nothing had they not been there.

Because of the lack of interoperability, we assigned them to firehouses in which there already was a FDNY apparatus in full service. They were instructed to turn out and operate as a team. As units came back from Manhattan, we reassigned mutual aid companies to other firehouses. Some of these companies saw three or four firehouses in different neighborhoods. I don’t know how many of them did any work or how much.

It’s uncanny, but whenever we have a major incident, the fire activity in the remainder of the city drops off. Other than an occasional call for smoke (whenever the wind shifted), we were pretty quiet in Brooklyn. By Thursday afternoon, our own resources started to firm up, and the decision was made to release the mutual aid companies. Some of them probably went home with a war story or two. Some of them may just be able to say, “We helped out in a small way.” In either case, their presence was greatly appreciated. By the last night of my four-day swing, life in the office had gotten almost back to normal. We had enough companies back in service to disband all but one spare apparatus company.

The mood on the platform was still somber at best. Many of the dispatchers who have more than 20 or 30 years on the job knew many of the firefighters personally. They’d go on golf outings, fishing excursions, or just hang out at the firehouse and play cards. We know first-hand what some of the family members of the missing are going through. We know the anguish of just sitting, helplessly waiting for some word, good or bad.

It will be months before life returns to anything close to normal. While we try to cope with the current losses, we mustn’t forget that this may only be a single step in the terrorists’ grand scheme. We must remain diligent and prepare for what may be their next move.

(Frank Raffa is a supervising dispatcher for the Fire Department of New York. His Web site is at www.FDNewYork.com. Published by permission.)