The five-year agreement gives Relm exclusive distribution rights for these products in North, Central and South America. The first models are expected to be available by January 2002, with the rest by April 2002. 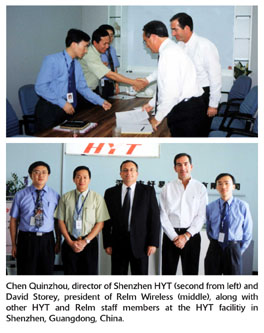 Founded in 1993, Shenzhen HYT specializes in the production of transceivers and spare parts. In China, the company previously was an agent of Motorola and Tait Radio Communications. The company’s Web site states that Shenzhen HYT is one of the largest two-way radio dealers in China. Shenzen HYT has 260 employees, including 30 electronics and RF engineers.

Regarding the agreement, David Storey, Relm’s president, commented, “Our agreement cements an important new relationship that furthers our strategy to leverage efficient, high quality, and lower-cost manufacturing capabilities worldwide. It also opens the door for the development of additional new products and possible manufacturing cost reductions on existing products.”

Speaking at APCO in August 2001, Storey said that Relm also intends to modernize its BK Radio products to make them capable of both digital and analog operation, “so they can be retrofitted to digital APCO P25,” he said. “Our plan is to use the embedded base of 70,000 BK radios in the field and use those accessories for our valued customers. These products will be cloneable backward and forward.”

Retrofitting would involve the insertion of a digital board into the radios’ analog-digital cores.

Storey said that Relm was profitable in the second quarter, and that the company has continued to “contain costs” and build the business.

“We’re also looking for rollup activities that could build the company into a larger entity. We continue to explore those opportunities as they continue. We’ve met with a number of companies on that subject,” Storey said.