Wildland fires are burning this morning in Colorado, Utah, New Mexico, Arizona, California Wyoming and along the border between Florida and Georgia as

Wildland fires are burning this morning in Colorado, Utah, New Mexico, Arizona, California Wyoming and along the border between Florida and Georgia as the National Interagency Fire Center, Boise, Ida., raised the National Preparedness Level to its maximum of 5. 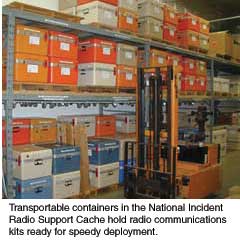 Of 179 new fires reported during the 24 hours ending at noon yesterday, five grew to large fires, including two in Colorado. Five large fires were contained in southern California and Utah. In all, 17 large fires are burning in seven states, and more than 2.2 million acres of land have burned to date.

As crews dispatched by NIFC’s coordination center gained the upper hand with the Hayman Fire in Colorado southwest of Denver, the Rodeo Fire in Arizona has denied firefighters the control they seek. National authorities estimate spending on wildland fires is running at about $7 million per day.

Among the assets deployed by NIFC are thousands of portable two-way radios. NIFC’s communications duty officer coordinates the deployment of frequencies, equipment, radio specialists or a combination upon request to any type of incident and any agency, according to established priorities.

The Hayman Fire is 67% contained and remains at 137,000 acres. Among other structures, the fire has destroyed 114 homes. A reoccupation plan has been completed for all evacuated subdivision and communities in Teller County. Yesterday, fire behavior increased along the south and east perimeter with a decrease in relative humidity, higher temperatures and gusty winds. Control lines have been tied across the entire perimeter except in the Lost Creek Wilderness area.

The Rodeo fire is experiencing extreme fire behavior. Yesterday, the fire grew to 160,000 acres. Evacuations are in place for the Arizona towns of Show Low, Heber, Overgaard, Forest Lakes, Linden, Lakeside, Pinetop and Hon Dah. Extreme fire behavior was observed all day. Highway 260 is closed. There is a high probability that the Rodeo fire and Chediski fire burned together late yesterday, creating fire of more than 245,000 acres that has destroyed 185 homes.

On Saturday, large areas of managed forest slowed the Chediski Fire’s advance. The areas were recently treated with mechanical thinning and prescribed fire. The slowed fire advance allowed crews and bulldozers to put indirect control lines around Heber, Overgaard and Forest Lakes and to create defensible space around homes.