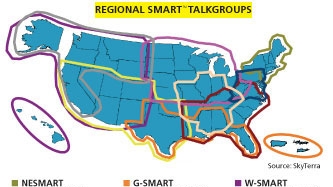 The three week-period that began on Jan. 27, 2009, went by in a blur for Drew Chandler, IT/communications manager for the preparedness branch of the Kentucky Department for Public Health (DPH). A major ice storm slammed into the commonwealth on Jan. 27, unleashing havoc in its aftermath. Five other states — Oklahoma, Illinois, Missouri, Indiana and Arkansas — also were affected, but Kentucky bore the brunt of the storm. A state of emergency was declared in 92 of the state’s 120 counties; of these, 40 of them qualified for reimbursement from the Federal Emergency Management Agency, according to Chandler.

Of Kentucky’s 4.2 million residents, 800,000 of them were without electricity, many of them for weeks. Indeed, some residents in western Kentucky still were without power nearly two months after the event, Chandler said. Roughly 8,000 people had to be evacuated from their homes and placed into shelters. They were the lucky ones, as the storm and its aftermath claimed 33 lives, several due to carbon-monoxide poisoning caused by the use of portable generators, Chandler said, adding that the storm’s financial toll on the state as of this writing is in excess of $200 million and was still increasing.

Given the enormity of the event, the state and the DPH both activated emergency operations centers. When personnel arrived on the scene, they discovered that the power infrastructure had been decimated. “Big superstructure towers that hold high-tension lines across large spans were crippled over from the weight of the ice; they looked like they had been put through a can crusher,” Chandler said.

The fixed networks, provided by the DPH and funded with federal dollars, are installed primarily at various hospitals and health departments across the state. Handsets and portable systems provided by SkyTerra (formerly Mobile Satellite Ventures) were disbursed to field personnel across the state, but primarily in the hardest-hit western regions.

However, there were plenty of issues, starting with the fact that personnel often were unfamiliar with the systems and equipment.

“We provide the equipment and we provide the service, but they decide how they’re going to use it, whether it is on a daily basis or only for emergencies,” Chandler said. “Of course, we encourage daily use so that they’re familiar with it during emergencies. This is a piece of electronic equipment, and such equipment develops issues. Satellite equipment is even more finicky than cellular.”

Another issue concerned power. When the storm knocked out the commercial electricity, the fixed satellite systems were supposed to automatically switch over to backup power. However, in some cases, a dedicated circuit for backup power hadn’t been identified when the equipment was installed; in other instances, the backup power simply failed. In at least one such case, the facility had allowed the maintenance contract for its generator to lapse. So, for the first 12 hours of the event, even satellite communications were spotty.

“They have their own internal issues to resolve, but based on the feedback we’ve received, they’re taking corrective actions,” Chandler said. “We can’t go out to every facility and make sure that they put the fixes in place so it will work when they need it.”

There were bright spots. One facility found a creative solution to its power challenges, according to Chandler, by renting a “pretty big” generator and wheeling it into its parking lot. Personnel then attached electrical sub-panels to the generator and then ran an extension cord from it to the power grid for the facility’s satellite network. “It worked just fine. A lot of them got pretty intuitive in the heat of the moment,” he said.

Despite these challenges, Chandler described satellite communications as something of an umbilical cord for first responders during the ordeal.

“[Three days into the event], we still hadn’t heard from some of our counties, so we sent a reconnaissance team out there with [mobile] satellite equipment,” Chandler said. “About the same time, one of our local public health directors drove 30 miles to a state-police post to determine what the shelters in that area needed.

“It just so happened that one of our scout teams was going to pass him on the way to their destination. They dropped off one of these satellite units, and for the next week, that was their lifeline back to the public-health operations center. It was the only thing they had to communicate with.”

“For example, if the Kentucky National Guard bought 10 units, they could have their own net,” Chandler said. “Public health has nine nets. We have some regional nets, three general-purpose nets and one dedicated to emergency-management use.”

The fact that the talk groups are available for free is a key differentiator and selling point, said Chandler.

“You’d never see Motorola or any [other LMR vendor] offer something like that up,” he said. “At the same time, I’ve got 355 of these SkyTerra units. If there were a charge to participate in these [nets], I don’t know that I’d do it.”

That said, Chandler is happy that the capability was available in the aftermath of the ice storm; it was particularly handy during the mad scramble to get supplies where they were needed.

“There was one instance where a regional coordination center heard a call from another center and said, ‘We have extra of this, tell us where you need it and we’ll get it there,'” he said. “That was an hour drive as opposed to the four-hour-plus drive from central Kentucky.”

The capability also came in handy in terms of deploying personnel.

“They need to be able to communicate on the way — not just when they land — because their mission may change,” Chandler said. “Their mission may be moved from one town to another.”

SkyTerra has expanded the concept by creating nine national and nine regional satellite mutual-aid radio talkgroups, or SMART (see graphic). The goal of the plan — which took only 14 months to pull together — was to eliminate the biggest barrier to first-responder interoperable communications that has existed for decades, said Jim Corry, SkyTerra’s vice president of government solutions.

Of course, the national and regional talk groups’ effectiveness will largely depend on the number of agencies that sign up for SkyTerra’s service. However, with monthly connectivity plans ranging from $69 to $129 per user, Corry doesn’t believe price will be a barrier to adoption.

Chandler, whose agency manages two of SkyTerra’s nationwide and regional talk groups, believes the capability to be invaluable.

“I don’t think you can put a dollar amount on what they’ve contributed to public safety and interoperability,” he said. 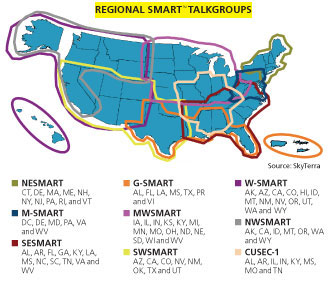 Hughes Network Systems intends to give SkyTerra some competition in this area with its Inter-Government Crisis Network, or IGCN, which lets subscribers build predefined, logical user groups, according to Tony Bardo, Hughes’ assistant vice president for government solutions.

A major difference between the SkyTerra and Hughes offerings is that the latter includes data connectivity. The entry-level, 128 Kb/s plan will cost about $60 per month. Another plan provides data rates of 2 Mb/s upload and 8 Mb/s download — plenty of bandwidth for responding agencies to conduct video conferences, according to Bardo — and costs about $500 per month.

Traditionally, cost has been only one barrier to entry for public-safety agencies contemplating satellite communications. Other significant hurdles include weather effects, latency and jitter.

George Choquette, Hughes’ senior vice president of engineering, said the company can control how much downlink power its satellites transmit on a spot-beam basis to overcome the effects of weather.

“We get radar data from the National Weather Service and other sources, and when weather comes into an area, we step up the transmit power,” he said. “It’s pretty cool. Now, when the 30,000-foot thunder cloud comes in and it’s hailing, [communications cease]. But you can effectively use this technique with much more severe storms than any conventional satellite system.”

Hughes also has addressed jitter, according to Choquette, by engineering into its system both constant-rate and on-demand bandwidth. “The satellite keeps track of how many of the connections are active at any particular time, and gives out slot-by-slot, packet-by-packet bandwidth to these terminals to service them,” he said.

In other words, the satellite can be programmed from the ground to allocate necessary bandwidth to public-safety terminals, essentially taking it from the general commercial pool when needed.

“Not only is each terminal a router, the satellite is a router,” Choquette said.