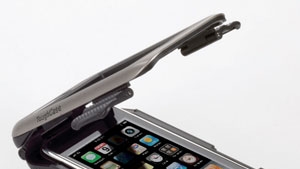 An enclosed device is waterproofed to IPX-7 standards, so it can be submerged at a depth of 1 meter for up to 30 minutes. 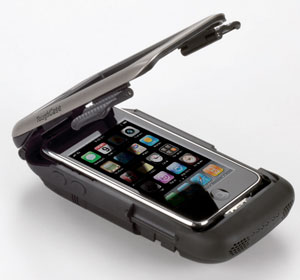 Magellan GPS yesterday introduced the ToughCase, which is designed to protect an iPhone or iPod Touch against outdoor elements without hindering the interactive features of the device.

An enclosed device is waterproofed to IPX-7 standards, so it can be submerged at a depth of 1 meter for up to 30 minutes, said Justin Doucette, director of product marketing for Magellan GPS. The ToughCase also includes an 1840 mAh battery that doubles the battery life of the device and an integrated high-sensitivity SiRFstar III GPS chipset that provides up to 3 meters of accuracy.

“The Magellan ToughCase is a case that wraps around your iPhone to essentially turn it into a handheld navigator,” Doucette said.

Magellan has put the ToughCase through several “shake-and-bake” tests to demonstrate its ruggedness, including chest-level drops, Doucette said.

“The case itself holds up quite well,” he said. “The one area we have very limited control over is the actual iPhone or iPod Touch. Those are consumer-electronics devices that don’t carry the same ruggedness as some of our products that we make at Magellan. We can’t guarantee that the phone isn’t going to get hurt if takes a hit.

While other manufacturers have created protective cases for iPhones, they typically prohibit the device from being used while being protected, Doucette said. The ToughCase, however, lets the user maintain interactivity with the device while it is being protected, he said.

Other devices also will fit in the ToughCase for protective purposes, but only the second- and third-generation iPhones and the iPod Touch models maintain their interactive features while inside the case, Doucette said. Magellan GPS is developing a similar product for the fourth-generation iPhone, he said.

Magellan hopes the ToughCase will be attractive to iPhone/iPod Touch users in several outdoor-enthusiast sectors and in many professional outdoor environments, such as construction, Doucette said. Available in July, the ToughCase retails for $199, he said.