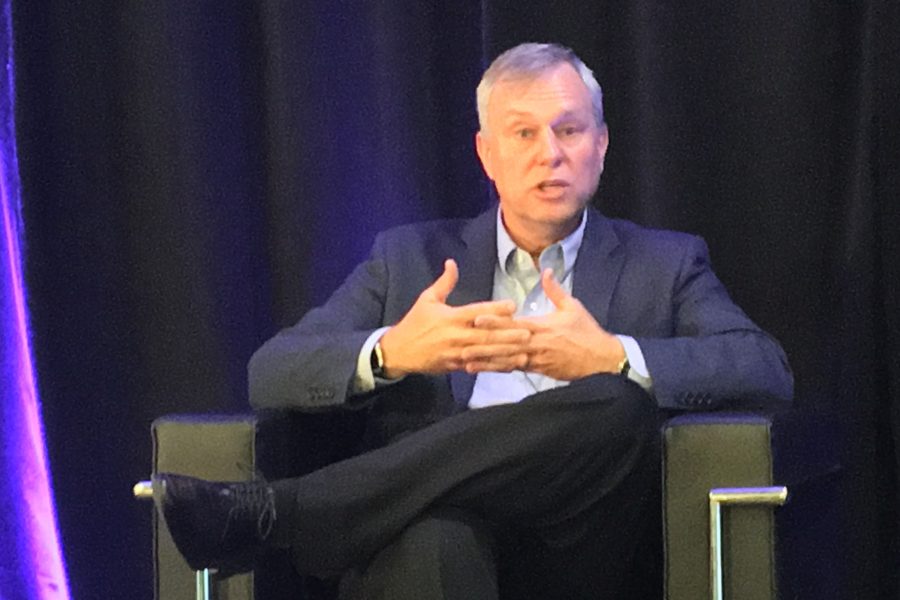 Motorola Solutions is exploring the capabilities of artificial intelligence and other new technologies, but the public-safety communications giant is striving to use them in a manner that improves the mission workflow and lets human beings make the ultimate decisions, according to a company executive.

Paul Steinberg, Motorola Solutions’ senior vice president of technology, acknowledged that many of the new technologies like artificial intelligence (AI) can require vendors and vendors to make some “weighty decisions” about their appropriate use, but he hopes that worst-case scenarios are not the only things considered.

“I’m really excited about AI, but what I’m worried about is that people so misunderstand the potential of it that we could throw the baby out with the bath water, as the saying goes,” Steinberg said during a keynote presentation during the PSCR Public Safety Broadband Stakeholders Meeting this month in Chicago.

“In general, what I’m afraid of is that people are assuming that AI equals facial recognition, [which] equals tracking and monitoring, [which] equals ‘bad’; therefore, AI equals bad—and that couldn’t be further from the truth.”

Steinberg said that Motorola Solutions has three guiding principles it is following as it determines the best way to leverage AI in its products:

One example of an area in which AI can be particularly helpful is monitoring video—a huge need, given the fact that the amount of video-surveillance footage from fixed and mobile cameras is mushrooming annually, Steinberg said.

However, studies have shown that humans monitoring video typically do not have a good attention spans, resulting in their efficiency in identifying key events in a single video feed dropping from 100% to 20% in just 20 minutes, according to Steinberg.

“We don’t deal well with complexity, either,” Steinberg said. “If you give me the job of monitoring one video feed looking for an event—forget the time length—about 90% of the time I’ll see it, on average. If you give me 3 by 3—9 video feeds to look at—the probability that I’ll see that [event] drops to 58%. And that’s assuming I’m at T-zero. If you take 20% (the 20-minute monitoring efficiency) times 58%, we’re not doing well.

“Frankly, human beings don’t do this well—they suck at these kinds of tasks.”

However, AI can help significantly by noting items in video—based on algorithms that detect changes or an item that was left behind—that may be worthy of attention, Steinberg said.

Similarly AI can be used to process speech to text in real time—for instance, in the case of a 911 call or communications from the field, Steinberg said. This process allows key terms to be cited that can prompt better recommendations from a call-taker or dispatcher, he said.

Text-to-speech software also can be used to help officers complete reports more quickly, so they do not have to spend as much time on administrative tasks, and it can help them search video and audio more efficiently for relevant content, according to Steinberg.

But Steinberg noted that it is important for companies and users to consider how such capabilities are implemented, so negative unintended consequences are not introduced.

“We have to very responsibly think about how we’re applying this, and that’s really my job,” Steinberg said. “Even though I talked about the upsides [of AI], in every one of those upsides, if you look hard enough, you can find some downsides.”

As an example, new technology can analyze a person’s speech patterns in a manner that indicate the person’s condition, such as whether they are tired or stressed, Steinberg said. While such information could be very helpful to first responders—from 911 personnel to officers in the field—as they work to resolve a situation, how that information is shared should be considered carefully, because it is personally identifiable information (PII).

“Once I determine something about you and your stress level, now that suddenly becomes something very unique to you,” Steinberg said. “So, we have to be very careful about how that information is actually managed, stored and used in service.

“The same exact example could be given about the biometric conditions coming off of a first responder.”

As Motorola Solutions seeks to utilize new technologies, it has adopted a strategy of investing in startup companies that are developing the technologies, so the company can get a better idea how the technology is developing and whether it could be used by public safety in the future, according to Steinberg. Motorola Solutions typically has about 20 such investments in startup firms at a given time, he said.

Motorola Solutions also has been purchasing many mature companies in recent years, spending more than $3 billion to acquire firms that primarily provide solutions for 911 or command-center environments, Steinberg said.

“So, the workflow might span all of those functions that we talked about, but naturally, it doesn’t. Literally, you see call-takers with four or five keyboards and mice in front of them.”

Some customer agencies also are embracing new business models to help spur innovation, according to Steinberg.

“One country—not in the U.S.—has leaned in and said, ‘We want you to be our single supplier to innovate,’ because they recognize that it’s really hard to innovate through lowest-cost bids or RFPs,” he said. “So, we’re working with them … on some projects that we think are mutually important.

“One of the projects that we worked on was this walking Internet of Things. There are sensors around a first responder—in this case, it was a firefighter—and we tried to bring that data together in a meaningful way.”

When developing products that leverage new technologies, Steinberg said it is extremely important to get feedback from public-safety users about the practical application of a product, particularly in the highly stressful environments faced by first responders.

“The more stress I give a human, the less ability they have to focus on anything but what is causing the stress,” Steinberg said. “When a police officer deploys his or her weapon, they’re not thinking about turning on their body-worn camera. They’re not thinking about changing their communication modes … and they shouldn’t be. The paradox is that, the more they could use the technology, the less cognitive ability they have to extract what they need at that point in time.

“That gets to a lot of the cool things that we can do now. The more tech we throw at people, one could argue that it’s actually not helpful, unless it’s done very, very carefully. That’s where context becomes so important—understanding the instant of the human’s condition and adapting the communication and technology for that.”