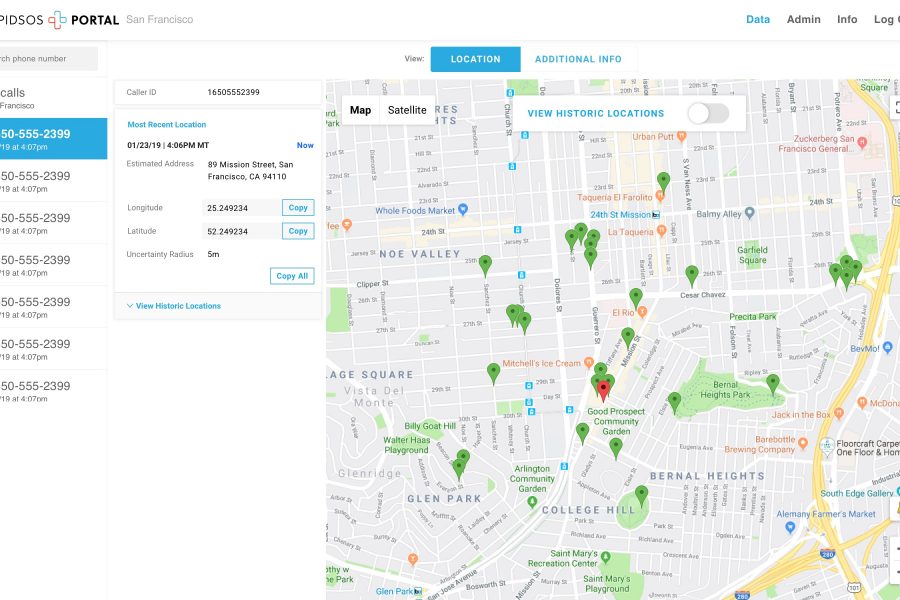 Jurisdiction View feature from RapidSOS a ‘game-changer’ for Arizona PSAP

RapidSOS yesterday announced the general availability of its new Jurisdiction View module, which quickly displays enhanced location information and other data associated with all 911 calls within the jurisdiction of a public-safety answering point (PSAP) on a map interface that is being described as a “game-changer” for at least one 911 center.

Included in the RapidSOS Portal software application that is free to PSAPs, the Jurisdiction View feature provides a map depicting the location and other information associated with an emergency caller—provided by RapidSOS input providers like Apple, Google, Uber and MedicAlert—in real time, according to Tom Guthrie, senior vice president and general manager of public safety at RapidSOS.

“We are showing them where we have from a [911] caller,” Guthrie said during an interview with IWCE’s Urgent Communications. “It’s not the calls, because we’re not a call-taking system; we are supplementary data to the calls.

“So, the dots on the map that you’re seeing [within Jurisdiction View] are the appearance of data from our clearinghouse from our input providers. It gives you a full view of your jurisdiction and the distribution of those calls coming in. That’s the situational-awareness piece.”

While RapidSOS also provides this caller information through its Query View, which lets 911 personnel collect data sent by RapidSOS associated with the 911 caller’s number, the Query View requires the telecommunicator to wait until the call is received to make the query. With Jurisdiction View, the information from RapidSOS is delivered to the PSAP automatically and quickly—typically before the phone rings in the 911 center.

“Jurisdiction View delivers to you,” Michelle Potts, communications manager for the Chandler (Ariz.) police department, said during an interview with IWCE’s Urgent Communications. “We keep Jurisdiction View up; everybody logs in at the beginning of their shift. Really, that is our 911 tool. We have our 911 map, we use ANI/ALI, we use our integrated solution, too. The direction that we’ve given everyone is, ‘Make good decisions, based on the information that’s put in front of you.’

“Every situation is going to be different, but we have found that the [Jurisdiction View] portal is giving us really great information.”

Potts said that the Chandler 911 center has been a been a beta customer using Jurisdiction View since early 2019, and the operational impact have been significant.

“Jurisdiction View actually provided so much more information that it was pretty much a game-changer,” she said.

“What we like is that … the enhanced data that is in there—like MedicAlert and Uber—is all in one central place. It’s kind of a dashboard for anything that’s coming.

“Any other enhanced data that is going to provide additional information for emergency services can sit on the portal and be delivered on a 911 call. So, if you want to report an emergency, however that is—Internet of Things—it’s unlimited, and it’s all in one place.”

Potts also noted the quality and fast delivery of the information, which is depicted on a map in near real time and includes features such as “breadcrumb” location tracking of a 911 caller on the move.

“On a 911 call, historically you just have one dot—you have a pin on a map that says, ‘We think it’s here, and the caller could be within this radius,’” Potts said. “With the [Jurisdiction View] portal, we have this location, we have the uncertainty radius—and we’re seeing a lot 5- to 10-meter radius—and now we’re seeing them move. We see these red pins moving on this map, and we’re seeing … in near real time where that caller actually is.

Having reliable location data for an emergency caller depicted on a map in near real time has impacted the manner in which the Chandler telecommunicators interact with callers, as Potts noted in an example of a domestic-violence victim who called 911 but was too traumatized to speak.

“When [the victim is] not able to communicate, and all of a sudden, she starts running and we can see the dots on the screen moving, the call-taker no longer has to say, ‘Which way are you going?’ and ‘Where are you at?’” Potts said. “We change our questions to be with the caller, and we can change our questions to find where the suspect is at, what kind of weapons are being used—more of the safety questions, rather than the basic questions that are sometimes impossible to get information from a victim who has been traumatized like that.

“In this case, this female was running down the street. Knowing that she is running west or east, that is a big difference. [With Jurisdiction View] we don’t even have to ask that in that moment. We’re more concerned about where is he [the suspected abuser] and things like that. It really expedites it.”

Many telecommunicators have expressed a fear that the addition of new data types could result in “information overload” that could distract call-takers from focusing on the emergency caller’s needs, particularly if a graphic video of an incident accompanied an emergency call.

Potts said the additional data provided by the RapidSOS platform has not been problematic for the Chandler 911 center.

“I think it makes us more efficient,” Potts said. “If we’re looking at the dots, and we can give better directions, then we don’t have to ask 72 questions anymore. We can look at the dots and we can give way more efficient, quality information that lead to better decisions … instead of having to go through this audible process of ‘What are you seeing?’ ‘What am I seeing?’ and how am I interpreting it in between. We cut down that time, and we’re may more efficient that way, even when things are kind of confusing.

“Over the long haul, in terms of adding things, as long as we continue to add it to the same place … I think we’ll be fine. I do think we save time, as long as we’re doing things efficiently.”

Potts and Guthrie said that Jurisdiction View also has delivered some promising results associated with a longstanding 911 problem—the use of non-service-initialized (NSI) phones.

“In a lot of cases, the call [from an NSI phone] going through the carrier path won’t show a number that’s assigned to that device; it will just say that it’s coming in from 911,” Guthrie said. “But, in some cases, we can actually see a 10-digit number that can be used to call them back, which is really unique.

“Some of the data that we’re able to get back directly from the device is more accurate at times than what might make it through the call path in the ANI/ALI feed.”

Similarly, Jurisdiction View can be used as a tool that helps a 911 center get help to citizens, even after suffering an outage to the traditional local 911 infrastructure, according to Guthrie.

“Even if the call doesn’t go through, the fact that a call was attempted may well go through for us,” Guthrie said. “So, even if you’ve got a temporary outage, you’re going to see data that came in about call attempts. If a PSAP still had outbound, 10-digit calling, they could call those callers back.