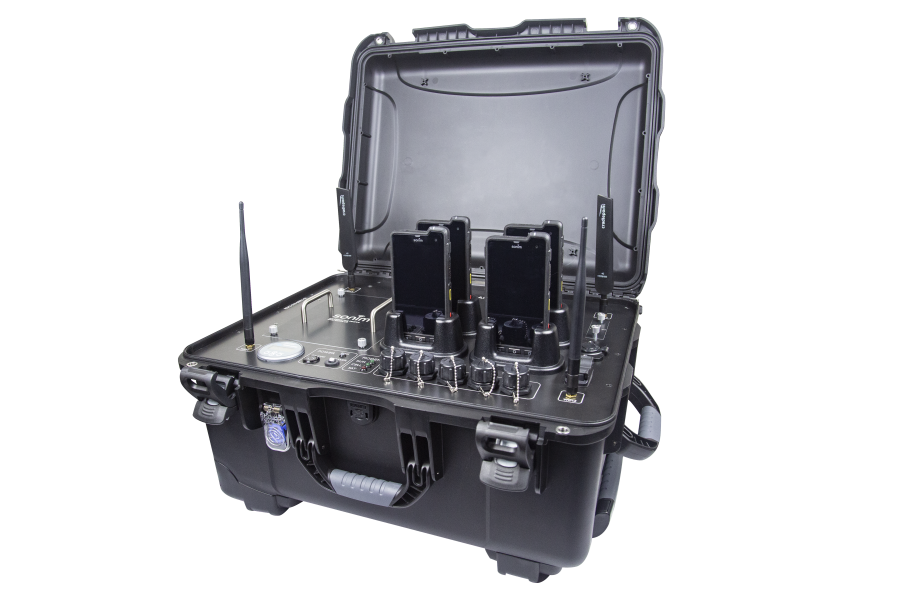 Sonim Technologies recently announced the formal launch of its latest versions of the Rapid Deployment Kit (RDK-3 and RDK-3i), which is designed to provide portable broadband connectivity in a rugged case to entities in locations where communications coverage does not exist or needs to be enhanced.

“This is a rapid-deployment kit to get you up and running with your communications until there’s a more permanent solution, whether it’s a SatCOLT, a COW or until the local or regional area infrastructure that has been impacted comes back on line,” Craig Gabel, Sonim Technologies’ senior sales engineer, said during an interview with IWCE’s Urgent Communications. “This is a great way to deploy rapidly until those resources are restored.”

A concept introduced years ago, the RDK-3 include familiar components like four Sonim XP8 rugged LTE smartphones, a Cradlepoint wireless router, a hardened carrying case, and an antenna system that supports cellular connectivity while establishing a 300-foot “bubble” of Wi-Fi coverage. In addition, an Inmarsat Broadband Global Area Network (BGAN) satellite link means the 26-pound package can be deployed to provide broadband connectivity even in the most remote areas.

“Powering it on takes anywhere from 3-5 minutes to get a carrier signal,” Gabel said. “If you’re using the satellite backhaul through Inmarsat, it could be 5-7 minutes, on average.”

Erin Luzzi, Sonim Technologies’ director of accessories, said these well-known RDK features have been enhanced in the latest version of package, the RDK-3.

“The main differences between RDK-2 and RDK-3 are based on very intimate discussions with customers and their feedback on RDK-2, where needed to continue to improve RDK around portability,” Luzzi said during an interview with IWCE’s Urgent Communications. “The main difference is that the case for the RDK-3 has wheels. So, it builds off of this human-portable, very easy-to-transport solution.

“The second improvement to RDK-3 is the addition of optional interoperability. The RDK-3 includes the JPS Interoperability Console—the RFP-Z2—which allows for connectivity to two donor radios.”

Luzzi said the RDK-3 features the case with wheels, while a second version—the RDK-3i—includes the wheels and the interoperability functionality through JPS Interoperability Solutions.

Another optional feature of the RDK-3 package is integration with a mesh-networking solution from partner Rajant to extend the potential range of broadband coverage, according to Luzzi.

“We’ve added an additional partner—Rajant—that provides a meshing capability,” she said. “Our RDK is compatible with their Kinetic Mesh Breadcrumbs, which is a very sophisticated, dynamic meshing system. As opposed to daisy chaining one-to-one, you can daisy chain dynamically one-to-many.”

Gabel said the ability for users to choose which options they want to include in their RDK-3 packages should be among the solution’s most attractive features, along with the flexibility to support devices such as sensors powered via Ethernet.

“It’s not just a box with a 300-foot bubble,” Gabel said. “It’s so much more than that, because you can customize this to your own unique needs. I think that’s what really sets this box apart from the competing products—or companies that are doing similar things but not really expanding to the length that we’ve gone to with the JPS interop, the power over Ethernet and expanded ports. It’s way more than a router in a box.”

While the RDK line was designed initially to provide extended broadband coverage in remote locations, Sonim is discovering that the portable package is being used in many other scenarios, Gabel said.

“In the urban scene, it’s more about having an emergency where you need to bring coverage into a building where the power’s been disconnected or shut off due to some sort of natural disaster, fire or a number of different scenarios,” Gabel said. “This allows you to bring that coverage into the building—with that included ‘bubble’ [of coverage] right out of the box—and being able to extend that coverage deeper into the building, using the mesh-networking technology.”

Luzzi said another attractive asset of the RDK-3 solution is its ability to interoperate with multiple connectivity services.

“The RDK-3 and RDK-3i are mobile-operator-agnostic,” Luzzi said. “You have dual-SIM capability with the Cradlepoint router, and then four handsets are included with the RDK, and those may be four handsets from any mobile operator. And, of course, you can connect any number of devices via Wi-Fi.”