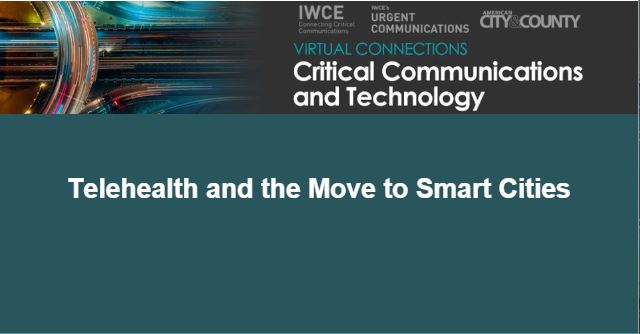 Availability of reliable broadband connectivity is proving to be a primary factor in determining what people can do during the COVID-19 pandemic, causing officials to reassess initiatives and policies in key areas like public safety, healthcare and education, according to experts speaking on recent panel about the subject.

David Witkowski, executive director of the wireless-communications initiative for Joint Venture Silicon Valley, said Silicon Valley is well known as an area where many broadband innovations have been developed, but the larger region surrounding the technological hub includes locations in which 25% of households do not have access to the Internet. This “digital divide” has been recognized by policymakers before, but the realities of social distancing and remote working/remote learning have exacerbated the differences between those with broadband those without, he said.

“I think regionally that the people who are doing better in the pandemic are the ones who have broadband, so … the pandemic is accelerating the digital divide, and that is showing up in a variety of ways,” Witkowski said during the webinar conducted last month (click here to listen to an archive). “This is not a new problem, but a light has been shined on the problem by the pandemic.”

Education is one area in which the impact of broadband—or lack thereof—was identifiable immediately as social COVID-19 restrictions were implemented, according to Witkowski.

“As the school districts were sending students home and then trying to figure out how they were very quickly going to transition in a distance-learning environment, some districts came to the realization that they could not guarantee that all of the students in their district had access to broadband, had access to a computing device, or had digital literacy—three things they are necessary for success in a distance-learning environment,” Witkowski said.

“It’s actually the case that these challenges also map over to telehealth and telemedicine.”

Indeed, where the infrastructure exists to support telehealth and telemedicine, the positive impacts are proving to be considerable, according to Kevin McGinnis, former FirstNet Authority board member and communication-technology advisor for the National Association of State EMS officials.

As well as letting patients undergo routine checkups quickly and safely with a doctor via a videoconference, broadband connectivity is proving useful during emergencies, McGinnis said. For instance, wireless broadband can allow a doctor to evaluate portable ultrasound results, so field personnel can determine whether the patient should be transported via ambulance or a helicopter that can cost $30,000 per trip.

During the pandemic, health officials have established policies to keep patients suffering from non-life-threatening conditions other than COVID-19 out of hospitals, both for health and capacity reasons. McGinnis said he believes this philosophy could prove transformative for the emergency-medical-service (EMS) sector. By using community paramedicine—using EMS resources to conduct primary and preventative when they are not being used to respond to an emergency—patients can be examined quickly and conveniently, instead of visiting a hospital.

“30% of all 911 calls to EMS do not need to result in a transport to the hospital, and yet EMS has always been seen as an entity that brings patients to a hospital,” McGinnis said. “In fact, the reimbursement system is such that that is exactly what we get paid for—that is our incentive. We don’t get paid, if we don’t bring a patient to a hospital.

“That is quickly changing, and we’re seeing systems like Houston starting to do telemedicine in the field with their 911 units. A pilot in Houston showed tremendous results where patients were able to be managed outside of the emergency department, saving money, time and resources, while making those EMS resources more available for real emergencies.”

Similarly, the COVID-19 episode likely will have city officials re-examining smart-city initiatives, according to Keshav Gupta, former IoT leader for the city of San Jose and managing principal and global smart-cities leader for EPAM Systems. To date, smart-city pilots have included a wide range of applications, but local governments—expected to have limited resources after the economic-shutdown measures were implemented—likely will focus only on smart-city projects that have clear value, he said.

“In some cases, we’ll have the destruction of useless ideas,” Gupta said during the webinar. “Cities are going to experience budget shortfalls. For smart-city investments that have been going on for the last several years, I think the shift in focus is going to be very obvious.

Gupta also noted the importance of city officials embracing a data-driven decision-making process, whether the information is coming from the city, individuals or healthcare agencies.

Technologically, most of this could be done today or in the near future. However, leveraging many sources of data can raise privacy concerns that should be addressed from a policy perspective before implementation, according to Gupta and Alan Tilles, a partner at the law firm of Shulman Rogers Gandal Pordy & Ecker.

Tilles noted that consumer devices such as sensors on wearables and video doorbells could provide valuable information to health officials and public safety during times of crises, if the information is accessible. Whether such data should be accessible by officials—and under what conditions, such as a warrant—is a matter that should be the subject of a robust public discussion, he said.

“I don’t want to sound like Dr. Doom today, but there are a lot of things to be considered in all of these things that have been discussed today and more,” Tilles said, citing the data collected by sensors on a watch as an example.

If governments are allowed to utilize data from such sources, it is important that it can be integrated into a broader smart-city platform that enables quick access by authorized personnel when needed, according to Tilles.

“If you’re truly going to be a smart city, you need access—in the proper form—to all of this information, in order to know, for example, that this particular area over here is … a hotspot for certain types of illnesses,” Tilles said. “To be able to do that kind of tracing in an anonymous fashion … To be able to tie that all together is really what is part of a smart city …

“It’s not just sensors. [It’s] ‘Oh my goodness. We’ve got all these complaints coming in from over here about rat infestations. Oh, well, we’ve got some telehealth information over here about certain diseases that are tied to rats.’

“So, it’s not just [smart lighting on] light poles. It is sensors inside office buildings that are providing temperature information, crowding information, movement information. All of it goes into creating a true smart city, with telehealth being only one piece of that pie.”

Of course, accessing such information in real time requires broadband connectivity. With so many critical sectors—healthcare, education, government, public safety, etc.—depending on reliable broadband, expect policymakers to take a more measured approach to ensuring that appropriate communications infrastructure is available, even in locations where the economics are challenging, Witkowski said.

“The reality is that I believe that, if we look at solving broadband in general for digital inclusion, we fix a lot of things that have been problematic and were inconvenient [prior to COVID-19] but now have become critical in the new reality that we all face,” Witkowski said.

“So, I think that it is important that we be programmatic and directive about how we build networks. It cannot be incidental. It cannot be, ‘Well, we hope someday to have a network that everybody can have access to.’ We need to say that this is critical for our future—as a city, as a region, as a state, as a country, as a world. This is something that we need to look at.”