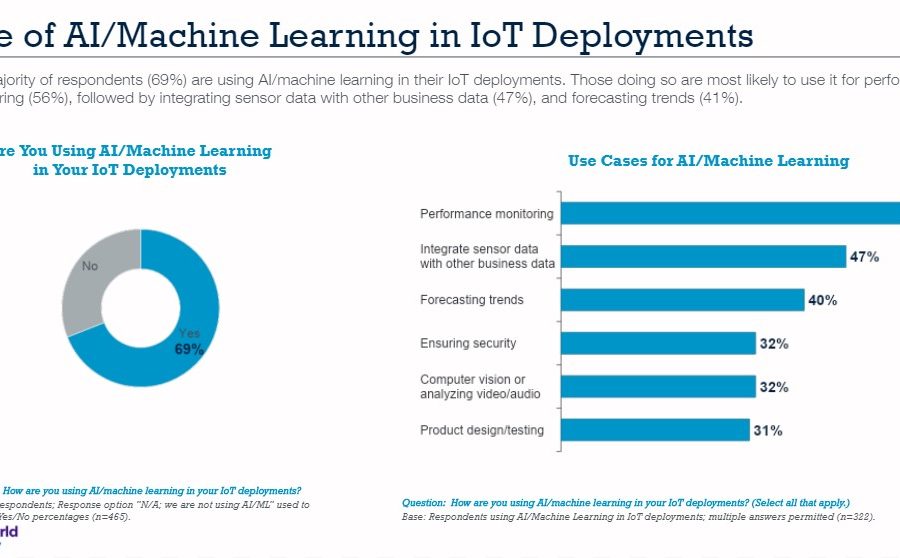 Artificial intelligence in IoT sees gains, but talent’s a hurdle

Artificial intelligence is a vital component of digital transformation initiatives as the volume of data that organizations gather continues to swell.

A total of 69% of survey respondents to the 2020 IoT Adoption Survey reported using artificial intelligence (AI)/machine learning (ML) as part of IoT initiatives. Top AI priorities include performance monitoring and trend forecasting in addition to sensor and business data integration. Other popular applications of artificial intelligence in IoT projects include ensuring security, computer vision and product design and testing.

Those findings are consistent with other data. Microsoft’s 2020 IoT Signals research, for instance, reported that 79% of organizations use AI as part of IoT deployments.

The concept of artificial intelligence has become more defined, according to Jason Haward-Grau, an advisory managing director at KPMG. A few years ago, “There was a sense that AI is the next big thing. It’s going to do all these wonderful things,” Hayward-Grau said.

But the outcome of using artificial intelligence was unclear in the past. One complication is that in many environments with IoT projects, legacy equipment is common. Industrial equipment, for instance, can be in use for a decade or more. “There was the question of where AI is going to fit. [Operational technology] systems are pretty antiquated most of the time,” Hayward-Grau said.

Use of AI in IoT Deployments

The most common use cases for artificial intelligence in IoT projects are performance monitoring, with 57% of respondents, followed by integrating sensor and business data (47%) and trend forecasting (41%). Other popular applications of AI were security optimization and audio/video analysis — both with 32%.