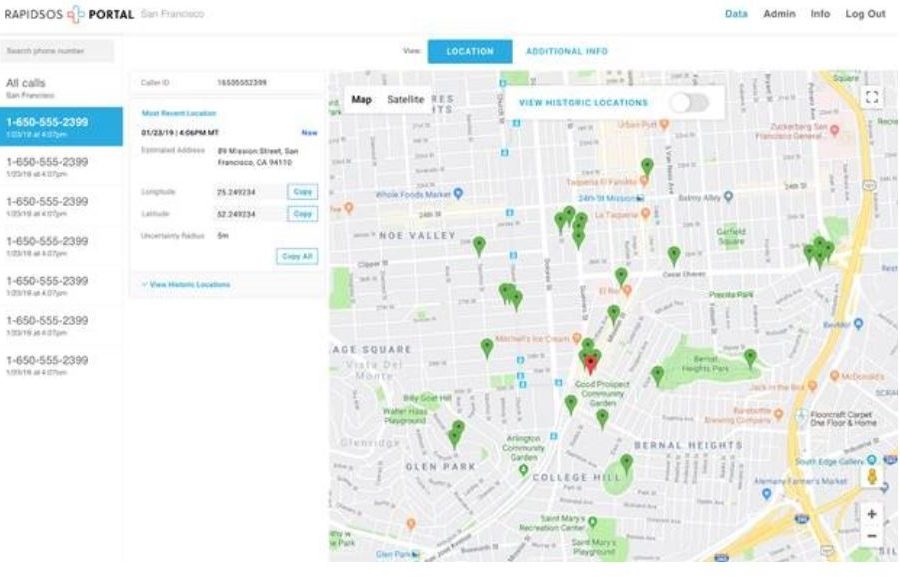 When the Dec. 25 explosion in Nashville caused outages that prevented 911 calls from being completed, many 911 centers turned to technology from cloud-based RapidSOS to both identify and locate emergency callers, so response efforts could be initiated, according to officials from RapidSOS and a Tennessee 911 center.

Cassie Lowery, assistant director at Rutherford County (Tenn.) Emergency Communications District, said the workaround is representative of the resourcefulness of the telecommunicators and other personnel at her 911 center, which also lost Automatic Location Identification (ALI) data for all 911 calls received during the outage.

“We’ve learned to be resilient and to figure out how to [deal with difficult circumstances],” Lowery said during an interview with IWCE’s Urgent Communications. “We have to learn to think outside of the box and find a new path.”

Lowery said the Nashville explosion resulted in outages that prevented many emergency calls from reaching 911 centers via normal AT&T connectivity until re-routing efforts were completed. To overcome the problem, Rutherford County telecommunicators leveraged the Jurisdiction View capability—functioning through backup Comcast connectivity to the cloud—from RapidSOS to minimize the impact to 911 callers, she said.

“With the RapidSOS connectivity that we have, the telecommunicators were logged into the portal and were watching the [Jurisdiction View] map for calls to pop up,” Lowery said, noting that many other 911 public-safety answering points (PSAPs) use the same technique. “Every PSAP was watching their jurisdiction, and when they noticed a call pop up on it, they would call the caller back, because the call obviously could not be delivered to us if we weren’t re-routed at the time.

“We were calling them back … Here in Rutherford County, we had Comcast VoIP phones, and we also had cell phones into the centers. We used both—anything we had available to us, we used.”

It is unclear whether the Rutherford County 911 center was able to initiate responses for all attempted 911 calls during the post-explosion outage, but it appears that the Rutherford County center was able to address the vast majority of callers seeking emergency assistance during this period, according to Lowery. In particular, there is a possibility that some 911 calls might not have been detected in the early stages of the outage, before personnel recognized the need to use the Jurisdiction View workaround enabled by RapidSOS, she said.

“We very well could have [missed a 911 caller during the outage period],” Lowery said. “I won’t say that we didn’t, but I’m just saying that we have not received any reports from citizens that we did not get a call or that we didn’t call them back.

“We haven’t had anyone else, to my knowledge, call and say, ‘We had this incident occur, and we weren’t able to reach you.’”

Karin Marquez, senior director of public safety at RapidSOS, explained how this Jurisdiction View capability in the RapidSOS platform is able to be used by telecommunicators, even when emergency calls for help from Android or iOS devices cannot reach the 911 center.

“As those calls were trying to go through the 911 network, and they weren’t able to be delivered by voice, we are separately receiving that location information and phone number from the 911 caller directly from their device,” Marquez said during an interview with IWCE’s Urgent Communications.

Because of this more direct link, both the caller-number and caller-location data from RapidSOS typically arrive at a PSAP prior to the phone ringing in a 911 center. While this Jurisdiction View attribute is helpful to the workflow during normal day-to-day operations in a 911 center, it has proven critical during outages like the those that occurred in the aftermath of the Nashville explosion, according to Marquez.

“We’re able to put that location information directly on the screen in front of that telecommunicator, so they would be able to see these map pins pop up, with a phone number that was correlated with that location,” Marquez said. “It kind of acted like their backup ALI, and they were able to call folks back [who tried to dial 911] and understand their emergency. [This lets telecommunicators] triage and prioritize those calls and also have that really critical location information, so they could send help.”

RapidSOS is used by more than 4,800 911 centers in the U.S. This scope was particularly helpful during the aftermath of the Nashville explosion, because the effect it had on an important AT&T network node resulted in outages that impacted operations in some 911 centers in Tennessee, Alabama and Kentucky for hours and even days.

“We heard from some agencies that it took until Sunday evening [Jan. 27] for them to be fully back on board,” Marquez said. “Now that doesn’t mean that everybody was out until Sunday; it means that they were rolling back in and able to start getting their networks back up and running.

“On December 25, in Tennessee, Alabama and Kentucky, we processed about 10,100-plus 911 calls. About 80% of them that were able to be connected and delivered to agencies that had access.”

Marquez noted the importance of 911 centers having redundant connectivity to the Internet when using a cloud-based platform like RapidSOS.

“Obviously, this building also was housing an Internet service provider, so some folks that didn’t have Internet may not have been able to utilize Jurisdiction View until they had Internet access back up and running,” she said.

Although the Jurisdiction View workaround has proven to be extremely beneficial to 911 centers that use RapidSOS during outages, this use case was not something that company engineers envisioned when designing the service, Marquez said.

“I would say that has been an unintended positive consequence, because we did not develop that tool for outages,” Marquez said. “We developed it so telecommunicators would not have to manually enter a 10-digit number—we were trying to streamline their process and improve their workflow.

“It turns out that, during outages, when we still receive that location, it’s a huge benefit to public safety to still respond and provide that life-saving emergency response through our platform … Unfortunately, in 2020, there have been several outages across the U.S., and this tool has been utilized in many other outages.”

With this in mind, this feature of Jurisdiction View is now included in the training that RapidSOS provides to 911 centers, according to Marquez.

“We have been working really hard to educate folks that, any time you need it, just ensure that you have this tool up and running, so that you see information popping up, even if that call doesn’t make it [to the 911 center],” she said.

“That includes when a caller disconnects early. They may have an emergency and, for some reason, either lost connection or somebody may have hung up that call. But 911 can still reach them, even if that voice call did not get completed, for whatever reason.”

“The really nice thing about Jurisdiction View is that sometimes the clearinghouse will receive the call information and will display it in Jurisdiction View, even if it’s a hang up and the call may never even process far enough to hit our phone system,” Lowery said. “Some of the calls that we called back were actual hang-up calls, where the person may have dialed the number accidentally, but at least it gave us the ability to find those calls and call them back.”

One other benefit of Jurisdiction View to 911 centers is the ability to help telecommunicators prioritize calls during the busiest of times, such as when a major incident occurs that generates multiple calls for emergency assistance. By using Jurisdiction View to identify a caller’s location, telecommunicators can prioritize calls received from areas away from a major incident, because that emergency is more likely to require a response separate from the major incident that already has significant resources dedicated to it, according to 911 officials.

Of course, the primary benefit of RapidSOS is better location-information reliability for 911 calls, as well enhanced accuracy in many cases. Lowery said she is grateful that the Rutherford County 911 center uses RapidSOS and that the center has resourceful personnel who recognized how to leverage this and other tools during a critical time.

“We were blessed that we were already using the system,” Lowery said. “When Jurisdiction View came out, the representatives at RapidSOS were good at pointing out to us that we might see a call pop up before it even rings in the center. A lot of our telecommunicators realized this, so they were watching for calls, as they normally do anyway. They realized that we had this tool available to us that would help us bridge the gap in the meantime.

“Luckily, we have well-trained telecommunicators that figured out how to overcome. We here at the district office, we work well together with those telecommunicators, and the jurisdictional agencies all came together. We met at the EOC at the EMA office, and we came up with additional phone numbers to reach everybody. We posted that on social media, everybody’s jurisdictional website pages, Twitter feeds, the news channels, and they relayed the information for those Comcast VoIP numbers, so you could reach the centers.”