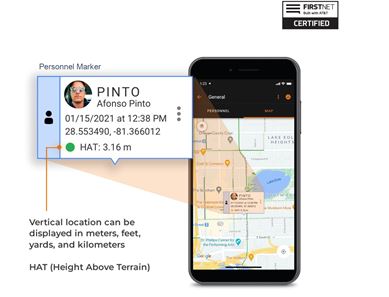 First-responder officials are applauding the recent AT&T announcement that FirstNet agencies now can access vertical-location (Z-axis) information powered by NextNav to find personnel inside taller buildings—a challenging task that has been described by many as the “Holy Grail” of public-safety communications.

Charles Werner, a former fire chief for the city of Charlottesville, Va., said he and others in the public-safety community have been working for decades to obtain vertical-location information to help them find personnel, particularly firefighters in smoke-filled buildings that need help.

“When you have a firefighter down or lost in a building, that’s the fire chief’s nightmare,” Werner said during an interview with IWCE’s Urgent Communications. “The Z-axis being able to give us that elevation level—in addition to the X and Y location—becomes the Holy Grail of what we in public safety have been waiting for.

“I think this is the most significant technology change—especially for the fire service—since the advent of radios. When you think about it, this is a life-or-death thing.”

“In almost every lost and downed firefighter situation, they’re disoriented.” Johnson said during an interview with IWCE’s Urgent Communications. “They don’t know where they are or how they got there, and they have a lot of trouble telling someone where to come and get them.

“The first thing we need to know to come and get you is precisely where you are. Then, the incident commander can send the right resource and take the right amount of risk for the next people that are coming in. It’s a game-changer, and it’s revolutionary.”

Indoor-location technologies have advanced dramatically during the past 15 years, in large part because of the proliferation of smartphones and Wi-Fi systems that provide Internet access to users. Under normal conditions, these newer technologies provide much more accurate two-dimensional (XY) location information than GPS, which does not work well when the satellite signal cannot penetrate a building. Some systems even provide a level of vertical-location information when the location of network infrastructure like nearby Wi-Fi access points is known.

Of course, public safety does not always work inside buildings under normal conditions. This is especially true for firefighters, who often have to work in an environment in which the commercial electricity that power indoor broadband systems has been shut off inside a building.

But the NextNav determines location by collecting sensor data from devices through its Metropolitan Beacon System (MBS) networks that have been deployed in the top 105 metropolitan areas in the U.S., which covers 90% of all buildings with at least three stories, according to Ben Ball, NextNav’s head of marketing.

“That’s actually our differentiator, that we don’t have to rely on Wi-Fi technology,” Ball said during an interview with IWCE’s Urgent Communications. “Because what’s the first thing that you do, if there’s a fire in your building? You probably turn off the electricity, which also turns off the Wi-Fi.”

NextNav’s system has been tested as part of the FCC’s proceeding to improve the location accuracy of emergency callers that is provided to 911 centers. Under current FCC rules, commercial wireless carriers could be required to begin providing vertical-location information in some areas beginning in April.

NextNav has built the needed MBS infrastructure in the 105 most populous metropolitans areas in the U.S., which translates to the top 52 wireless markets as calculated by the FCC, as some markets contain multiple metropolitan areas.

“We actually finished our network early,” Ball said prior to the FirstNet announcement. “The FCC needed us to be done by April—and that was our original target—but we’re actually done now. We actually stood that up in just a couple of months, which is something that we’re pretty proud of.

“So, it’s ready to go. The solution is actually delivering results at this very moment, and there are some first-responder agencies that AT&T is testing this with right now.”

NextNav is able to leverage the same technologies and the same infrastructure that it has been developing for 911 to provide Z-axis vertical-location data to FirstNet users, according to Ball.

“What AT&T is rolling out is the public-safety piece of it, which is basically situational awareness for first responders,” he said. “When an EMT rolls up on a scene and you want to make sure that they’re in the right place, that you’re deploying your resources in the right way, … you’re going to want to know where they are in the building, and that’s what this solution is for.

“The FCC standard is built for 911. That is not what is going out right now, … which is the situational-awareness piece of that. That being said, the same technology is being used for both. The accuracy rate is the same for both technologies.”

Werner said he has been impressed with NextNav’s accuracy.

“I had a chance to go to San Jose, California, and see the NextNav demonstration in action,” Werner said. “I was able to walk up 11 stories, and I could look on a device and tell exactly what hotel room I was in front of.”

NextNav uses barometric pressure and sensor measurements that are common to most smart devices available in the market today to calculate the vertical location of the user. Currently, public-safety agencies only can access this Z-axis information is through Intrepid Networks’ Response for FirstNet situational-awareness application, which maps the user’s XY location coordinates and also displays Z-axis information in a Height Above Terrain (HAT) measurement.

Public-safety agencies that subscribe to FirstNet service can begin leveraging Z-axis information in their operations by purchasing the Intrepid Response for FirstNet application and paying $5 per month for the vertical-location service, according to Scott Agnew, AT&T’s assistant vice president for FirstNet products.

Bruce Dowlen, Intrepid Networks’ marketing director, said that the Z-axis feature is free to FirstNet subscribers through an offer that will be available for six months.

“It’s only available through Response for FirstNet; it is not available through just Intrepid Response, which is our branded offering,” Dowlen said during an interview with IWCE’s Urgent Communications. “You could download it, contact us, and we could have you up and running literally within hours.”

Coordination of the Z-axis location capability is the responsibility of an agency’s administrator for FirstNet, who needs to identify all users of the vertical-location functionality, Dowlen said. Once the agency’s list of approved users is complete, the users just need to download the latest version of the Response for FirstNet application to transmit vertical-location information, he said.

When using the Z-axis feature, users should calibrate their devices—a process that typically takes 30 seconds—from a stationary position on flat ground prior to entering the building to get the most accurate vertical-location readings. In addition, users need to be able to receive a cellular signal.

“If you can make a phone call, you’re good,” Dowlen said, noting that Intrepid Networks personnel have tested the solution successfully in the company’s five-story office with Low-E glass.

Agnew said that Response for FirstNet is the only application to display the Z-axis information from NextNav today, but AT&T officials believe other application providers will want to join Intrepid Networks in integrating vertical location with their solutions.

Ken Rehbehn, Omdia’s critical-communications analyst and a volunteer firefighter, said he believes the availability of vertical-location data gives vendors a powerful tool that they can integrate into products to improve first-responder safety.

“It will be a real contribution if the combination of NextNav and FirstNet can enable solutions that perhaps are integrated into the self-contained breathing apparatus (SCBA) ensemble and provide incident command with the status of the people who are working, as well as where they are,” Rehbehn said, noting that Z-axis location could be combined with existing motion-detection sensors in the masks.

“As you start enhancing that capability with location information built into an SCBA—and one would hope that’s part of the evolution of innovation that’s happening here—then the search [for a downed firefighter] can begin sooner, because it’s being telemetry triggered, as opposed to other people having to figure out that someone is in trouble. The location information allows the resources to pinpoint the area that they need to be working in.”

Another evolution anticipated for the Z-axis solution is greater accuracy in the most extreme environments, particularly as it relates to many firefighting scenarios. While NextNav has undergone extensive testing in normal conditions, it has not been able to determine how its sensor-based readings will vary when windows have been shattered, sprinkler systems are activated, or a facility is filled with extreme heat or smoke.

“No one says, ‘Here’s our building. Please set this on fire,’” NextNav’s Ball said.

By having the vertical-location service operating in the field, those associated with the solution believe much will be learned during the next several years.

“I think it’s necessarily going to happen that way,” Ball said. “You build something for an ideal scenario and you test it the best you can, given the scenarios that you think you’re going to face out there, but there’s always going to be edge scenarios—the ones that kind of come out of left field—[that are difficult to duplicate in testing].

“That’s yet another reason why we’re really glad that public safety is going to be first market vertical that’s going out with this. If you think about everything we can learn from those edge scenarios and we apply into the commercial scenarios, it’s going to make it just that much better.”

Johnson said public-safety users should have realistic expectations during these extreme circumstances.

“It’s a rational expectation that the product that we come out with here may not be the product we end up with, in terms of how the technology matures,” Johnson said. “I think, if you pick the right partner, they will mature it to public safety’s advantage. I expect evolution in it.”

“It’s not perfect. We’re going to be learning,” Agnew said. “But at least it provides a direction of where that user is.”

And that’s a big step forward for public safety, which has struggled for years to tackle the in-building location problem, Werner said.

“I’ve been on this since 2006 or before, because that’s always been the one thing that always has eluded us,” Werner said. “There have been ideas about doing bread crumbs and different types of positioning things in buildings, but it never came to fruition where we could make it work. Either it was not economical or it was too difficult to make happen on the fly, so it just always eluded us.”

Sue Swenson, former chair for the FirstNet Authority board, said that in-building location with Z-axis was a priority for her from the earliest days of the organization, while she was still a regular board member. Seeing that vision become a reality is especially gratifying, she said.

“I’m thrilled. I’m thrilled that we finally have something in real life to support public safety. I think this is a perfect example where the FirstNet Authority made a difference. It just shows how they can really act on behalf of public safety, make a requirement, and hold the providers’ feet to the fire, which did. The good news is that NextNav was able to deliver.”

“It is a credit to the FirstNet Authority and to FirstNet, Built by AT&T, that we were able to implement the Z-axis [location capability],” Johnson said. “If it weren’t for the performance requirements for public safety, I could argue that it never would have been done.”

“It’s a game-changer for public safety and literally the Holy Grail.”