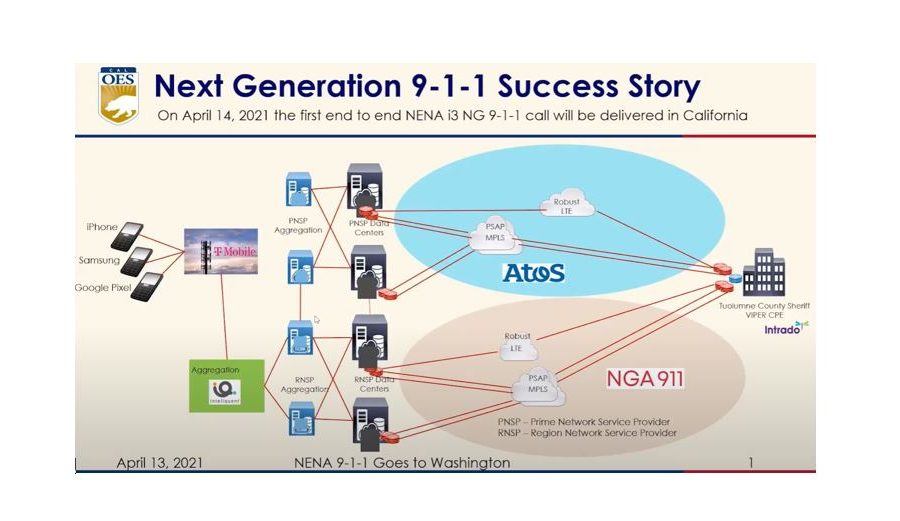 A California county today is expected to deliver what is believed to be the first end-to-end call to a 911 public-safety answering point (PSAP) that meets the National Emergency Number Association (NENA) i3 standard for next-generation 911 (NG911), according to officials with the state of California and NENA.

Budge Currier, 911 and emergency-communications branch manager for California, made the announcement yesterday during NENA’s virtual “911 Goes to Washington” event and shared a diagram of the call flow (pictured above). Conspicuously absent from the i3 call processing is a reliance on many legacy 911 components like a selective router, automatic number identification/automatic location identification (ANI/ALI) or a master street address guide (MSAG).

“We’re excited that, on April 14—which is tomorrow—we will be doing our first end-to-end i3 call in California,” Currier said during the presentation. “We’re aggregating calls from T-Mobile across a variety of devices. They’re being sent to Inteliquent, who is delivering them to NGA 911—one of our regional providers … They will deliver that information to the Tuolumne County sheriff, and we will deliver the first true NENA i3 end-to-end that we’re aware of anywhere in the nation.

“We’re not relying on any legacy components. There’s no ANI/ALI, there’s no MSAG, and there is no selective router in this call flow—everything is geospatially routed.”

Currier said that state officials are “extremely excited” about California 911 centers beginning the migration to the IP-based NENA i3 platform, which is designed to support next-generation capabilities, including the receipt of multimedia communications, geospatial routing, and more efficient sharing of emergency call data with other 911 centers, when necessary.

“Clearly, it’s been a long road,” Currier said. “I know that many [911 systems in the U.S.] have had successful deployments of ESInets and other components of i3, but this will be the first—that I’m aware of—end-to-end i3 call flow.

“As we move through this deployment, it will take us the rest of the year to complete the rest of our 450 PSAPs in the state of California, but this is a huge first step.”

“Tomorrow, in California, there will be the first end-to-end, i3-compliant, next-generation-911 call,” Fontes said in opening remarks for the virtual “911 Goes to Washington” event. “This is an important milestone in the whole history of 911.”

Currier said that deployment of the i3 capabilities in other California 911 centers will continue in May and be executed throughout the rest of the year—a timetable he previously has noted as being realistic, if it is not undermined by unforeseen emergency events. In addition to the entities involved in this first end-to-end i3 call, regional providers for deployments elsewhere in the state include Lumen (formerly CenturyLink) and Synergem, he said.

Once the core broadband connectivity between California 911 centers is in place, the state will turn its attention to facilitating a migration statewide to call-processing equipment within the 911 centers that is designed to fully leverage the next-generation capabilities as efficiently as possible, Currier said.

“Once we build this NENA i3 next-gen-911 system, we will have basically built a superhighway,” Currier said. “The next step then will be to bring in video, media and all of these other technologies onto this superhighway, and we’re working with the carriers right now [to determine] what those connections and interfaces would look like.

“The problem is, most of our call-processing equipment that’s out there in the state today can’t support all of these rich features in its current state—essentially, it’s like driving a Model T vehicle on this superhighway that we’ve created. So, our next step will be to deploy cloud-based CPE throughout the network that will support all of these rich data sources that we’ve been talking about for next-gen 911. We’ll begin those deployments next year.”