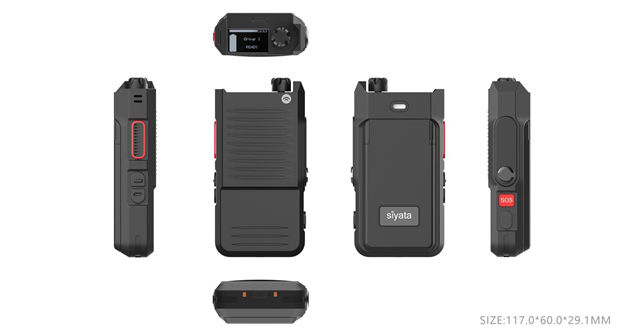 Siyata Mobile this week announced the SD7, a ruggedized handset that is designed specifically to support 3GPP-standard mission-critical-push-to-talk (MCPTT) and other PTT-over-cellular (PoC) offerings in a small, affordable form factor that emphasizes simplicity of use.

“It’s simple. It’s easy to use. It performs like a radio,” DePue said during a webinar hosted by IWCE’s Urgent Communications. “Public safety and construction companies, they want a device that operates just like the radio that they’ve been using for years, and they want it in a form factor that will work.

“It’s simple, and it’s easy to use. They press the button to talk, and they release it to listen, so it’s pretty straightforward. This is the ultimate upgrade to move into an LTE device, to give that radio-like experience.”

Users of MCPTT have applauded the performance and audio quality of the LTE push-to-talk service, but many have questioned the wisdom of running MCPTT or other PoC technologies on a feature-rich smart device that also is used to support multiple data applications from an operational perspective. In fact, many PoC customers have disabled multiple features on smart devices issued to employees, so they can only use them for push-to-talk communications, DePue said.

But this approach is problematic, because the enterprise often ends up paying for an expensive smart device with a touchscreen and a full-feature rate plan from a service provider, even though the device is used only for push-to-talk communications.

“Very exciting seeing affordable device options targeting the mission critical market. End-users will benefit from a larger range of form factors to choose from, no longer limited to premium (but pricey) devices.

“A large range of available devices is key to reducing the total cost of ownership (TCO) of these solutions and will definitely appeal to a much larger number of customers, widening the whole mission-critical ecosystem.”

Click here to learn more about Omdia and its industry reports.

Addressing this reality was Siyata Mobile’s goal with the pocket-sized SD7, which does not have a touchscreenbut does feature a dedicated push-to-talk button and the ability to support all forms of PoC—MCPTT, carrier-integrated PoC and over-the-top PoC applications, according to DePue.

“Most of the customers that are using push-to-talk [service] today, they just want push to talk,” he said. “if I talk about public works, utilities, DoTs, fire, EMS or law enforcement groups where they really just want an LTE push-to-talk handset, this is going to be a solution for them.”

DePue said the SD7 is designed to support North American carriers, noting that the handset operates on Band 14, Band 66 and Band 71 spectrum. Siyata Mobile is working closely with carrier partners, but the company is not allowed to identify them yet. Partners will be unveiled as the SD7 is made commercially available later this year, he said.

DePue declined to talk specifically about pricing for the SD7, noting that will be determined by carrier partners. However, he said the cost of a SD7 “absolutely” will be less than a typical smartphone.

“I think people are going to be pleasantly surprised when they see the pricing, especially through the carriers,” DePue said. “When you get the carriers involved, they can bring that subsidy price down even further,” DePue said.

In addition to being a lower-cost device, the fact that the SD7 only supports broadband push-to-talk communications and limited text messaging over LTE or Wi-Fi network means that carriers can offer it on a lower rate plan—in some cases, a rate plan used for Internet of Things (IoT) devices, DePue said.

“Having a device that’s affordable on an MCPTT-only rate plan brins it well within reach of a pretty much every customer out there, and that’s what we’re excited about—it’s an easy-to-buy, easy-to-deploy and easy-to-use device,” DePue said. “With many carriers, they zero-rate that data usage on push to talk, so it falls into a very low data-usage [rate plan].”

Another benefit of the SD7’s limited functionality is battery life, which lasts 12 hours on a single charge and can be augmented with a swappable battery, according to DePue.

“Because we’re not powering a big six-inch screen that gobbles up battery, [the SD7] this  is designed to go and go and go,” he said.

Although the SD7 has limited user functionality, it boasts a Qualcomm chipset that is needed to provide the “horsepower” necessary to meet the performance requirements of the MCPTT standard in LTE Release 12, DePue said.

“This will support that low-latency push-to-talk experience that one would expect with mission-critical PTT,” DePue said the SD7 does not support proximity services (ProSe) or other direct-mode technologies but noted that “Siyata Mobile is working on a solution like that.”

The SD7 has the type of sensor technologies found in a typical smartphone, including GPS, proximity sensors and a gyroscope, DePue said.

Siyata Mobile is known in North America for in-vehicle devices, notably the UV350, which has been lauded by users for its clear audio, even in high-volume environments. DePue said the same technology is integrated into the SD7, although the SD7 has a much a lower-watt speaker in its much smaller form factor.

Siyata Mobile has developed and sold handsets internationally for several years, but the SD7 is the first Siyata Mobile sold in the North America market, DePue said. The SD7 will be sold first in North America and later marketed globally, he said.

“Siyata is proud to offer the next-generation of communication hardware solutions for the first responder and public safety markets,” Seelenfreund said in a prepared statement. “No longer do these important service providers need to carry an assortment of devices just to be able to communicate with one another. Instead, a rugged device like the SD7 that offers PTT features will make their mission-critical jobs a lot easier, especially in moments when time is of the essence.

“We remain committed to being an innovation leader and provider of communication systems for first responders and enterprise customers alike. The SD7 is a perfect complement to our flagship Uniden UV350 in-vehicle communication device and to our portfolio of cellular boosters. As such, we are in discussion with multiple carriers to launch this device, and we expect first in North America in the second half of 2021 and then in Europe in 2022.”

Those interested in learning more about the SD7 can view it in person at the APCO show beginning Sunday in San Antonio and at IWCE in Las Vegas, which will be conducted Sept. 27-30.