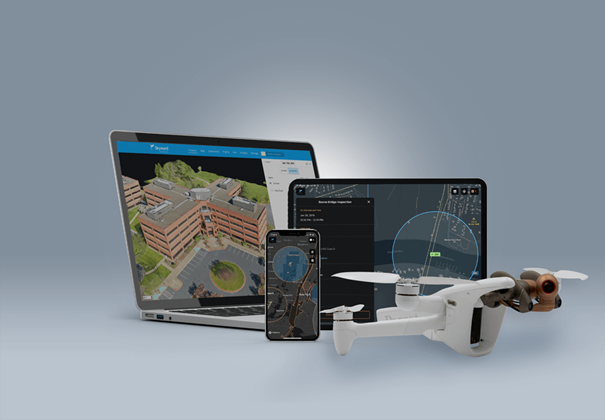 Matt Fanelli, Skyward’s director of strategy and operations, said the Parrot ANAFI ai drone includes the capability to connect to Verizon’s 4G network, so video can be delivered back to the enterprise in real time, as opposed to users having to wait for the drone to return before processing images.

Notably, Skyward “enables mid-flight data transfer to begin processing imagery into 2D orthomosaic maps while Parrot ANAFI Ai is still in the air, anywhere within Verizon’s 4G LTE coverage area,” according to a Verizon press release about the announcement.

This approach accelerates informed decision-making by enterprise users by significantly reducing the time to begin viewing the video and reduce the number of trips that a drone needs to make because the needed images were not captured during the initial trip, Fanelli said.

“We’re thrilled to partner with Parrot to bring the first LTE connected drone to market,” Fanelli said during an interview with IWCE’s Urgent Communications. “This is groundbreaking in a number of ways, both in the present and the future. “This is a best-in-class advanced drone, in terms of obstacle avoidance, ubiquitous command and control, and faster time to insight.

“The ANAFI Ai brings together a lot of best-in-class technologies, adds Verizon’s best-in-class network and—through Skyward’s mapping and modeling, as well as our command and control using the Skyward in-flight app—it opens up a whole new world for those enterprises to be able to fly, plan and process faster than they were before. The efficiency drivers with this new technology are the things that we’re so excited about … We think that it checks off a number of those critical needs for our enterprise customers.”

Drone usage has grown in many key sectors—for example, public safety, utilities, mining and construction—as drone-captured video has proven crucial in a variety of use cases, from infrastructure inspection to search-and-rescue missions. However, implementing a drone program has proven to be challenging for many enterprises, because they have to procure the various technological pieces separately and integrate these components on their own.

Expected to be shipped early next year at a price of $4,000, the Parrot-Skyward offering is designed to simplify capturing video by drone for enterprises by including each of the components—the drone, LTE connectivity, as well as the Skyward mobile app and mapping software—in a single package, according to Fanelli.

“Each different piece that we’re excited about all comes together in that seamless, end-to-end solution,” he said. “Making something easy for an end customer to use is much more difficult than making point solutions that do part of the job.”

Verizon’s Skyward team provided drone support to firefighters battling the Big Hollow fire in Washington, but Fanelli believes the Parrot-Skyward package—with a drone that boasts 32 minutes of flight time on a single charge—can deliver the same performance at a price point that is much more affordable to public safety and other critical-infrastructure enterprises.

“While we used a different system for that operation, it cost a lot more and was a much more expensive to put together,” Fanelli said. “This system that we’re bringing to market now with the ANAFI Ai brings all of those capabilities in a much smaller, much more cost-efficient package.

“I think we’re going to start seeing those public-sector entities that have that kind of a use case trending toward this Parrot ANAFI Ai and Skyward solutions to deploy, whether it’s in a search-and-rescue mission or a disaster-response or inspection mission, I think those are definitely [scenarios] that this drone was designed for.”

Drone operations in the U.S. typically have been limited by FAA rules that dictate that the drone travel only within the visual line of sight of the pilot. However, the Parrot-Skyward package could represent a significant step toward enabling the many beyond-visual-line-of-sight (BVLOS) a reality, Fanelli said.

“So, it’s not going to take thousands of dollars and hundreds of man hours to prove that a system is safe. I think we’re going to be able to show that we can deploy this in a lot of ways that are useful to commercial drone operations with not many regulatory changes. That’s part of the hope. What we hope to test with customers in real use cases and real scenarios next year.”

“The release of the first off-the-shelf drone with Verizon 4G LTE connectivity will advance drone operations for pilots nationwide,” Scott said in a prepared statement. “From supporting higher volumes of data transfer and yielding faster time to insight to enabling reliable beyond visual line of sight operations, we are proud to play a leading role in providing new capabilities. This is the next step in our ongoing efforts to connect the sky on America’s most reliable network for more than a decade.”