Harris unveils the LMC-1000, a ruggedized, multiband LTE handheld device that is designed for public safety, including features such as a dedicated push-to-talk button and a high-definition touch screen that enables functions to be accessed, even if the user is wearing gloves. 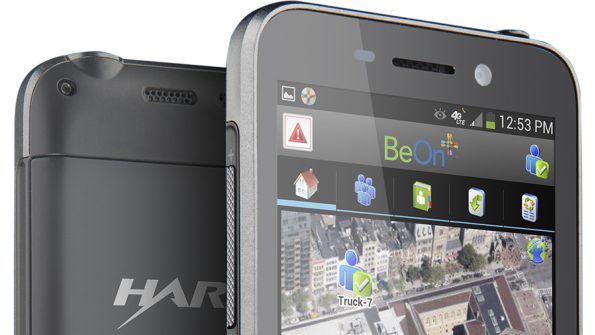 LAS VEGAS—Harris today unveiled the LMC-1000, a ruggedized, multiband LTE handheld device that is designed for public safety, including features such as a dedicated push-to-talk button and a high-definition touch screen that enables functions to be accessed, even if the user is wearing gloves.

Harris is not new to public-safety LTE devices, as the company has introduced a tablet, a vehicular router and a P25 portable radio that can operate on Band 14 700 MHz spectrum—the airwaves licensed to FirstNet to support its proposed nationwide public-safety broadband network (NPSBN). However, the LMC-1000 is the first public-safety LTE handheld device built by Harris.

“There are devices out there in the market, but we haven’t had one out there,” Michelle Johnson, director of LTE product-line management for the Harris Communications Systems group, said during an interview with IWCE’s Urgent Communications. “So I’m excited that we have this opportunity to announce it at the show. And you should look forward to more devices coming out from Harris.”

Johnson said the LMC-1000 includes a dedicated push-to-talk button that can be configured to work with LTE push-to-talk applications, such as Harris BeOn. With the recent approval of a mission-critical push-to-talk (MCPTT) standard for LTE, Harris has begun work to develop a new version of the application to meet the new 3GPP standard.

Images and video can be viewed in full-high-definition clarity on the LMC-1000’s 5-inch, LCD touch screen that features a special glass and “imprint touch” technology that lets users wearing gloves—a common occurrence in the public-safety arena—leverage the touch-screen functionality.

“We have certain first responders that wear gloves, and that was one of their concerns: ‘Can I use this with my gloves?’” Johnson said. “Yep, actually you can.’”

Johnson said Harris plans to enhance the display and touch-screen capabilities in the future, such as making on-screen buttons larger if the user is wearing gloves.

“Our next phase is to improve the UI [user interface] on it to address certain types of conditions or even certain types of users,” she said. “So, based on your login credentials, it will have a user interface that is comparable to what your needs are. We’ll be building upon this product with that capability.”