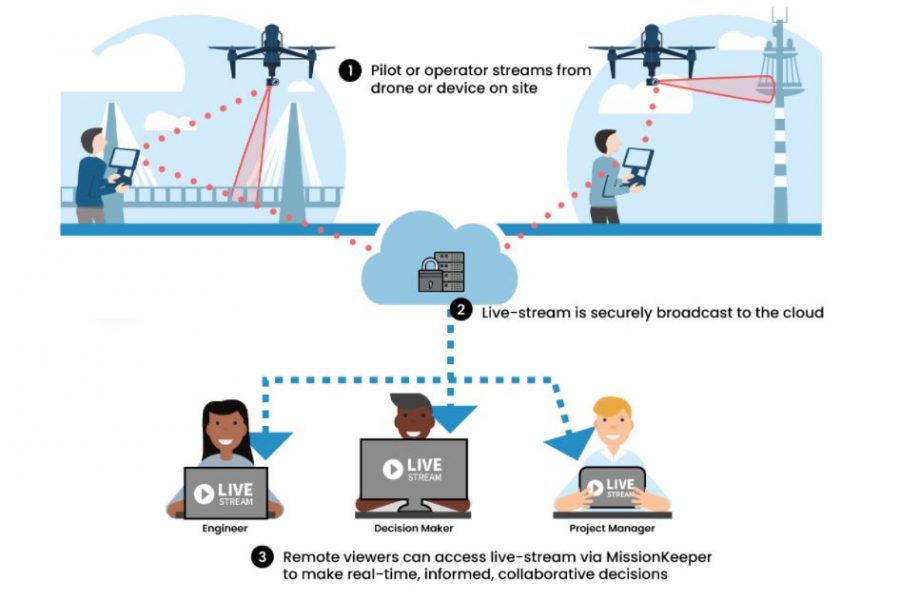 Drones and robots increasingly are being used to gather reconnaissance video to improve response efforts, but the footage often has been available only to personnel near the drone pilot without considerable delay. FirstNet hopes to address this problem with MissionKeeper from KSI Data Sciences, a cloud-based platform that supports near-real-time streaming of video that can viewed from anywhere in the world and enable collaborative decision-making about an incident.

“Take a wildfire, for instance,” Gaster said during an interview with IWCE’s Urgent Communications. “You probably have 15 agencies that are dealing with a particular wildfire, and not all of their people are on site. You may have the National Guard back in Sacramento. You may have FEMA looking in from Washington [D.C]. You may have local CalFire. If you want to share the feeds of what’s going on with all of them, then you do need an Internet connection.”

“Our focus has been traditionally streaming video with low latency in an environment that people can use to share—where people can collaborate.”

At a time when streaming services are part of everyday entertainment, video streaming from the location of an emergency might seem routine, but that’s not the case—particularly when trying to deliver footage in near real time over a challenging connectivity environment, Gaster said.

“What we do sounds tremendously easy, because everybody watches Netflix and everybody watches YouTube, and they think, ‘How hard can it be?’” Gaster said. “But with those kind of systems, you see a spinning wheel for 10, 20 or 30 seconds, and then you get a lovely experience, because they’re buffering—they are smoothing out that experience.

“If you don’t have an ability to that, because you’re trying to move the video as fast as possible—so that people at the other end can actually interact with the pilot or the people on the ground with as little delay as possible—then you have to find a way to deal with the thousands of microbreaks that occur naturally in an LTE network.”

Microbreaks are commonplace in LTE networks and are not noticed by end users during a voice call, but knowing how to make them transparent in a video setting can be difficult, Gaster said.

“There are some protocols out there that allow you to do ultra-low, sub-second latency. The problem with those is that they don’t scale very well. So, if you get more than a certain number of users on there, you start to see the effects pretty quickly.”

“One of the things we learned out in the field with public safety was that the last thing they want is to hit some kind of paywall when they get past a certain number of users, especially in the middle of an operation,” he said. “Basically, a customer is allowed to invite as many users as they like to a particular mission. At the end of the mission, the guest users lose access.

“If they want to get regular access, that’s fine—they become licensed users and off they go. But if they want to be a guest user, they’re in for that one mission, and that’s as far as they go.”

In addition to this scalability, Gaster outlined the primary performance characteristics of the MissionKeeper service.

“What we’ve had to develop in the cloud is a system that is—first of all—secure, so we have end-to-end encryption,” Gaster said. “Secondly, it provides as low latency as you can get. Thirdly, it’s extremely mindful of the network—we stream 720p HD at about 1.5 megabits up, which is very low and very bandwidth-thoughtful. So typically, if you’re out in the field and have a 3-4 meg uplink, you will have no issues with us, because you’ll still have overhead, obviously.”

MissionKeeper users do not view video in real time, but the latency typically is low enough that they can provide meaningful input to a drone pilot, based on the images they see, Gaster said.

“We typically have two-and-half to four seconds of latency,” Gaster said. “In most use cases that we’re talking about—we’re not talking about remotely piloting the aircraft—that is definitely fast enough. In other words, I’m seeing what the pilot’s seeing, so I can ask the pilot to zoom in, slew left, slew right or whatever it is. About a three- to five-second lag is fine—and we give that globally across the world.”

And video in the MissionKeeper can leveraged in multiple ways, according to Gaster.

“We also have an API that allows analytics to dip in and dip out, so they can grab our video, grab our data, run their algorithm and then return a result either into their own system or back into MissionKeeper, if they want to build that interface. We try to make sure that you capture [the video] once and can use it many times.”

Gaster said that KSI Data Sciences has introduced new MissionKeeper pricing to support public safety, particularly smaller agencies. The minimum offering is a 5-user package at a monthly cost of about $33 per user, he said.

“So, the entry price is less than $2,000 per year, and each user typically gets 100 hours per month for both storage and streaming,” Gaster said. “We’ve yet to find any user that comes anywhere near that.”

“That license entitles you to view and stream on any device, and it includes unlimited guest accounts per single mission.”

Today, that can be done with the MissionCaster, a $4,900 robust communications package that include a Cradlepoint router and it housed in a “lunchbox-sized” Pelican case that can be carried to the location of a drone pilot, Gaster said. KSI Data Sciences also has developed a pocket-sized prototype dubbed the “MissionCaster Mini”—notably lacking the Cradlepoint router—that can leverage other available broadband connectivity to deliver video into the MissionKeeper platform.

“If you’re working in an environment where, 9 times out of 10, you get enough bandwidth, then the MissionCaster Mini would be the way to go,” he said.

Gaster said development of the MissionCaster Mini is at the prototype stage today but declined to speculate when the device would be commercially available or how much it would cost, other than to promise that it would be “very cost-effective.”

MissionKeeper and MissionCaster technically can be used for any kind of video, but KSI Data Sciences has avoided integration with body-worn cameras that have become increasingly commonplace for first responders, Gaster said.

“The reason we don’t deal with body cams is that they tend to have a tremendously large regulatory burden around them, because the video is used for evidentiary purposes,” Gaster said, noting that MissionKeeper is designed to enhance situational awareness. “That creates all sorts of storage requirements, different types of security requirement, etc.”

KSI Data Sciences only was established in 2015, but personnel for the company began learning the intricacies of mission-critical drone video more than a decade earlier while working for a startup that worked with the U.S. Department of Defense, according to Gaster.

“Our previous startup ended up managing almost all of the video and telemetry from unmanned aircraft over Iraq and Afghanistan for seven or eight years,” he said. “We had experience with drones much earlier other people in this space. It’s not like we’re smarter than anyone else, it’s just that we came across all of the problems way, way earlier.”

That experience was evident during an evaluation conducted by AT&T that led to MissionKeeper recently being named as a FirstNet Ready application, Gaster said.

“There are actually very few people who do that, because it’s never been anybody’s primary focus—they’re always building a drone, a robot, a camera or whatever. Very few of them think about how you bring together multiple sources, so that it becomes much more useful for the customer.”

Since then, KSI Data Sciences has gone through “quite a deep vetting process” with AT&T, including security audits, performance reviews, and an agreement to have each version of the MissionKeeper mobile app reviewed by AT&T.

MissionKeeper is designed to work over any type of broadband network, but Gaster said the quality-of-service guarantees provided to FirstNet users should make FirstNet a particularly attractive connectivity choice for those working with drones in emergency-response scenarios. Having MissionKeeper named as a FirstNet Ready application is big step for KSI Data Services, he said.

“I think it’s an endorsement of the rigor that we’ve gone through to qualify to be a FirstNet vendor and partner with AT&T,” Gaster said. “It’s really just validation that what we do is not that easy; if it was, everybody would be doing it—that’s kind of how we see it.”