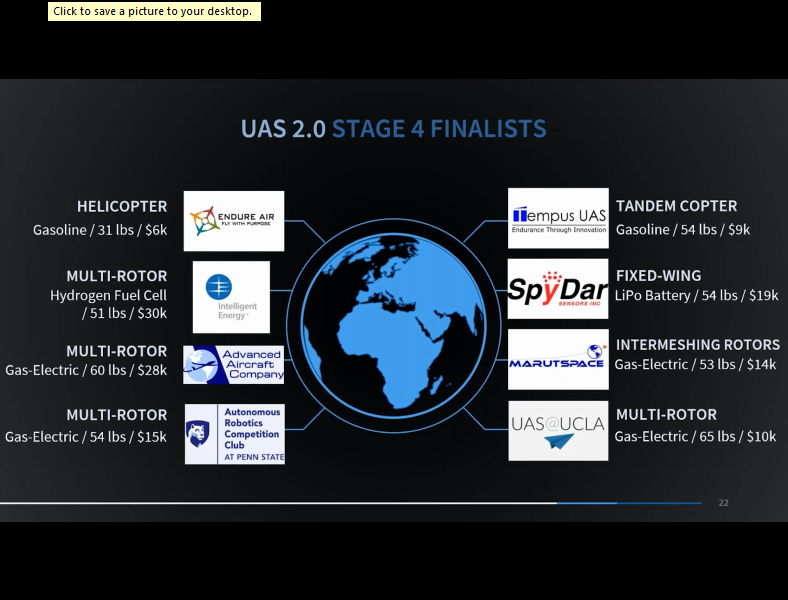 These latest flight times potentially are significant for providing LTE connectivity to public-safety agencies as they conduct search-and-rescue operations in remote areas without coverage or in locations where terrestrial infrastructure has been compromised. Tethered LTE “cells on wings” (flying COWs) and tethered LTE blimps have proven effective for providing long-term connectivity, but their tethered nature limits the coverage area and lengthens the time necessary for deployment.

In contrast, an untethered drone that can be deployed quickly and largely can be controlled autonomously could be used to act as an LTE tower in the sky as initial responders work in a scene, particularly in a search-and-rescue scenario, according to Chris Baker, senior public-safety advisor for the FirstNet Authority and a volunteer firefighter. Most public-safety representatives agree that maintaining connectivity while rotating drones with 18-minute flight times would be impractical in most scenarios, but the longer flight times from a variety of drone designs participating in the PSCR challenge could address that concern.

“Looking at things that public safety needs and not necessarily has, in terms of a light and reasonably sized UAS for ease of transport and quick deployment at the scene,” Baker said during the PSCR event. “It has to have the maximum endurance possible to avoid interrupting the operation overall around getting the UAS up and down to, for example, fuel it.

“The platform needs to have good autonomy, both for basic flight control and for implementing automated flight plans, such as in a search.”

In addition to having longer flight times, the teams reaching the final stage of the PSCR prize challenge had to demonstrate that their drones could be deployed from their storage container and made operational within 20 minutes. They also had to demonstrate Level 2 autonomy, capable of executing pre-programmed flight paths and avoid obstacles without intervention from a pilot.

Untethered drones and robots have proven to be valuable tools to response efforts by delivering photos, video and sensor-based telemetry information during short reconnaissance flights, according to Travis Hull, public-safety products advisor at the FirstNet Authority. But longer flight times mean that untethered drones could be used to support LTE communications during the critical early stages of a response effort, he said.

“UAS 2.0 has helped continue to shift that role of the UAV becoming  a more active component—in this case, providing a communications link for responders in the field,” Hull said during during PSCR 2021. “I expect we will find that UAV communications links are going to become [part] more effective operations in the field and—in the end—save more lives and property.”

Pete Hallenbeck, a North Carolina volunteer firefighter who has studied public-safety UAS use, said he believes first responders should be able to count on drone-enabled LTE connectivity at the scene of virtually all incidents, if there is not an issue with some kind of unwanted interference.

“The drone-based communications are going to be the telemetry to the drone and the video,” Hallenbeck said. “Pretty much, they’re good, as long as nobody’s interfering with them. There’s a little bit of attenuation, if there’s a lot of moisture in the air. But overall, the nature of the incident—whether it’s a wildland fire or a structure fire—doesn’t have a big impact on the communications.

“The only thing I’m not taking into account there is if silly people or bad people decide to interfere with the communications, and that’s a problem that a lot of really smart people are looking into.”

PSCR Division Chief Dereck Orr said he was very pleased with the results from this second UAS prize challenge, noting the “significant advance” from the organization’s 2018 drone challenge.

“To go from 18 minutes to 112 minutes, that exceeded my expectations,” Orr said during an interview with IWCE’s Urgent Communications. “I was going to be really happy if we doubled it [the 18-minute flight time from 2018], tripled it or got above 60 minutes, but we almost hit two hours.

“I was just reviewing a report … and they talk about a survey, and most first responders in the survey stipulated that they would need a drone that type of LTE payload for at least two hours. So, we went from 18 minutes in 2018 to almost hitting that two-hour mark in 2021.”

As part of the 2012 law that created FirstNet, PSCR received $300 million to fund public-safety research initiatives. Instead of solely awarding grants to conduct research, PSCR incorporated prize challenges like this UAS competition in a effort to maximize potential sources of innovation. For the most recent UAS challenge, 43 teams from around the world submitted entries.

“To me, it just shows the power of this open-innovation platform that allows innovators from all over to come together, work on a challenge, go through multiple phases, continue to improve, and—by the end of approximately a year’s effort—you see the result being this massive increase in time under generally the same constraints that were seen in 2018,” Orr said.

“I think it really brings home the value of the prize-challenge/open-innovation model and reaching out to non-traditional innovators, getting them involved and having this competition-style mechanism that seems to bring out the best in people, in terms of getting them to think outside of the box and advance their technology and ideas.”

PSCR has announced its plans for a third UAS challenge that will focus on the speed, resilience and security that can be provided to drones. The results of that prize challenge are scheduled to be unveiled in the summer of 2022.